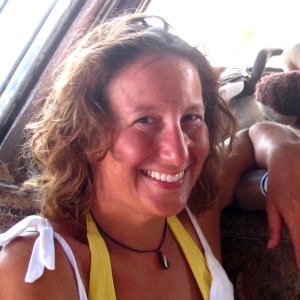 Cathy Salustri works out of Gulfport, Florida, travels across Florida on foot, bike, boat, or car to places the Interstate bypassed long ago, as well as those spots where natural beauty has survived the onslaught of overpopulation. She attended the University of Central Florida, and earned her undergraduate degree at the University of Tampa finding the Florida Studies MLA program at the University of South Florida St. Petersburg. Cathy has written travel pieces for USA Today, Visit Florida, regional magazines and local press. You can find all her travel writing at the greatfloridaroadtrip.com.

Under the guidance of Florida scholar and writer Gary Mormino, Cathy wrote what she calls “possibly the least academic master’s thesis ever,” logging almost 5,000 miles retracing driving tours from the WPA Federal Writer’s Project Guide to the Southernmost State in search of Florida’s forgotten destinations. That work became Backroads of Paradise, a travel narrative about her journeys along Florida’s backroads, published by the University Press of Florida in 2016. In 2017, Cathy and her book appeared in the New York Times.

Cathy started freelancing after quitting a government job in a self-described “fit of self-respect” in 2003. Except for a brief few years where she thought she might be suited for office work and thusly took the arts & entertainment editor post at Creative Loafing Tampa, she’s freelanced since then. Her freelance work included 12 years at The Gabber Newspaper, where she covered hyperlocal news. During her tenure at the Gabber, she penned an opinion column, Hard Candy, and wrote a monthly in-state travel piece. For fun (and profit) she attended local city council meetings and aggravated elected and appointed officials.

Cathy’s working on a series of pulp fiction novels about a mythical Florida town, based partially on her time at The Gabber.

Cathy speaks about Florida around the state and, close to home, at Eckerd College’s Osher Lifelong Learning Institute (OLLI). She also offers what she calls “casual photography” services for special and everyday events such as bridal showers, birthday parties, and other celebrations.