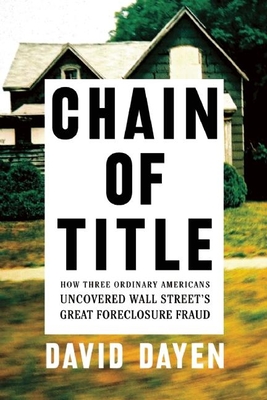 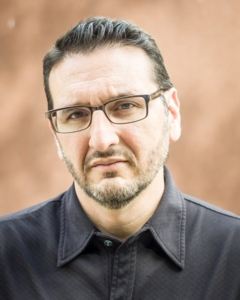 David Dayen is a contributing writer to Salon and The Intercept and a weekly columnist for the New Republic and the Fiscal Times. Other outlets that publish his work include Vice, The Nation, the American Prospect, Naked Capitalism, and In These Times. He lives in Los Angeles. His first book, “Chain of Title,” was released in May 2016. The book was the winner of the Studs and Ida Terkel Prize.

The global economic crisis in 2007 had its origin in the U.S. housing market, but very few of us know the role played by courts and judges in cascading this crisis to a global proportion.

While battling with the largest banks, three ordinary Americans faced with the prospect of losing their homes helped to uncover a foreclosure fraud that banks never owed up to. Wall Street bankers used securitization to connect global investors with the U.S. home borrowers, transforming in the process banks to loan originators and traders. Naturally, bankers were happy to pass on the loans and mortgages as hot potatoes while collecting fees with the connivance of rating agencies.

For nearly three hundred years, we had preserved the integrity of the home title and the clear ownership claim. However, the securitization process succeeded in destroying that bedrock of free market economy in less than a decade. As a result, more than eight million home titles cannot be traced, and the process is still fraught with inaccuracies and fraud as judges are unwilling to enforce the laws on the books.

David Dayen skillfully narrates with eye-popping details how three individual home owners uncovered the foreclosure fraud while fighting losing battles with the big banks. To make matters worse, neither regulators nor government agencies, judges or local law enforcement officers were willing to help these struggling home owners. Whenever local regulators were getting close to uncovering the fraud, they were quickly silenced by lawmakers in Florida, California, Nevada, and in Washington.

Dayen shines much needed light on the two-tier accountability system under which our judges enforce selective laws, as well as how banks can err and get away with it but a borrower cannot. At the peak of the crisis, judges were foreclosing a house by the minute, yet neither the bank nor the mortgage servicer could prove if they ever had the legitimate claim on the house.

Be prepared to be angrier as you thumb through the travails of these three families, whose lives are being shattered by the foreclosure crisis. And if you think this can never happen to you, think again.