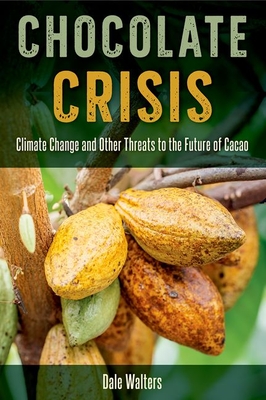 Chocolate Crisis: Climate Change and Other Threats to the Future of Cacao

Chocolate is the center of a massive global industry worth billions of dollars annually, yet its future in our modern world is currently under threat. In Chocolate Crisis, Dale Walters discusses the problems posed by plant diseases, pests, and climate change, looking at what these mean for the survival of the cacao tree.

Walters takes readers to the origins of the cacao tree in the Amazon basin of South America, describing how ancient cultures used the beans produced by the plant, and follows the rise of chocolate as an international commodity over many centuries. He explains that most cacao is now grown on small family farms in Latin America, West Africa, and Indonesia, and that the crop is not easy to make a living from. Diseases such as frosty pod rot, witches' broom, and swollen shoot, along with pests such as sap-sucking capsids, cocoa pod borers, and termites, cause substantial losses every year. Most alarmingly, cacao growers are beginning to experience the accelerating effects of global warming and deforestation. Projections suggest that cultivation in many of the world's traditional cacao-growing regions might soon become impossible.

Providing an up-to-date picture of the state of the cacao bean today, this book also includes a look at complex issues such as farmer poverty and child labor, and examines options for sustainable production amid a changing climate. Walters shows that the industry must tackle these problems in order to save this global cultural staple and to protect the people who make their livelihoods from producing it.

Chocolate Crisis: Climate Change and Other Threats to the Future of Cacao

I am Emeritus Professor of Plant Pathology at Scotland’s Rural College (SRUC). Before I retired in 2016, I was leader of the Crop Protection research team at SRUC’s campus in Edinburgh. My research interests included induced resistance to plant pathogens, novel approaches to plant disease control, and plant-pathogen interactions. For 35 years I taught Plant Biotic Interactions, Plant Pathology and Plant Responses to Stress, to final year undergraduates.

I have written two textbooks (Plant Defense: warding off attack by pathogens, herbivores, and parasitic plants and Physiological Responses of Plants to Attack ) and edited three others (Induced Resistance for Plant Defense, Disease Control in Crops, and Molecular Biology in Crop Protection). I have also written a popular science book – Fortress Plant: how to survive when everything wants to eat you, published by Oxford University Press in 2017. My latest popular science book, Chocolate Crisis: Climate Change and Other Threats to the Future of Cacao, was published by University Press of Florida on 5 January 2021.

I was born in Tenby, a small seaside town in Pembrokeshire in west Wales in 1957, but spent most of my childhood in Trinidad, where I was lucky to attend Queen’s Royal College in Port-of-Spain (picture on left). I travelled back to the UK for my university education and did my undergraduate degree at Wye College, University of London, and then travelled north, where I studied for my PhD at Lancaster University. Eighteen years later, I was awarded a DSc from Lancaster University for my research on plant-pathogen interactions. I became a Fellow of the Royal Society of Biology in 1998.

I live in Prestwick on the beautiful west coast of Scotland with my wife, two dogs, Sparky and Gizmo, and our lovely black cat, Magic.