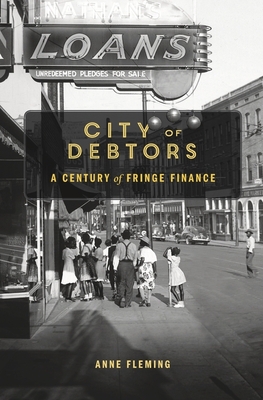 City of Debtors: A Century of Fringe Finance

Since the rise of the small-sum lending industry in the 1890s, people on the lowest rungs of the economic ladder in the United States have been asked to pay the greatest price for credit. Again and again, Americans have asked why the most fragile borrowers face the highest costs for access to the smallest loans. To protect low-wage workers in need of credit, reformers have repeatedly turned to law, only to face the vexing question of where to draw the line between necessary protection and overreaching paternalism.

City of Debtors shows how each generation of Americans has tackled the problem of fringe finance, using law to redefine the meaning of justice within capitalism for those on the economic margins. Anne Fleming tells the story of the small-sum lending industry's growth and regulation from the ground up, following the people who navigated the market for small loans and those who shaped its development at the state and local level. Fleming's focus on the city and state of New York, which served as incubators for numerous lending reforms that later spread throughout the nation, differentiates her approach from work that has centered on federal regulation. It also reveals the overlooked challenges of governing a modern financial industry within a federalist framework.

Fleming's detailed work contributes to the broader and ongoing debate about the meaning of justice within capitalistic societies, by exploring the fault line in the landscape of capitalism where poverty, the welfare state, and consumer credit converge.

City of Debtors: A Century of Fringe Finance

Fleming was a pathbreaking scholar whose article on the canonical contracts case on unconscionability doctrine, Williams v. Walker-Thomas Furniture Co., changed the way many taught it. Fleming’s prize-winning first book, “City of Debtors: A Century of Fringe Finance” (Harvard, 2018), explores the growth and regulation of small-dollar lending institutions in the United States over the 2oth century.

Her research interests included contract and commercial law, consumer finance, and American legal history, with a focus on the relationship between law and poverty. Fleming also had embarked on another book project, “Household Borrowing and Bankruptcy in Jim Crow America, 1920-1960.”

“Anne Fleming was the scholar, teacher, and colleague we should all hope to be—rigorous, insightful, empathetic, and kind. What she accomplished in a too-short career makes her loss even greater,” said HLS Professor Bruce Mann, one of her mentors when she was a Climenko Fellow.

“Anne was brilliant, generous-minded and wryly hilarious. As a colleague and friend in the Climenko program, she regularly gave transformatively insightful comments on others’ work even as she honed her own scholarship. Her students relied on her levelheaded advice and profound commitment to their success.

When Anne talked, people listened. And even as her wisdom shone through in all she did, she also had unfailing comic timing and an acute sense of irony so welcome in the self-serious world of academia. We are all better for having known her and will miss her beyond words,” said Susannah Barton Tobin, ’04 managing director of the Climenko Fellowship Program at HLS, where Fleming had been a fellow in 2012.