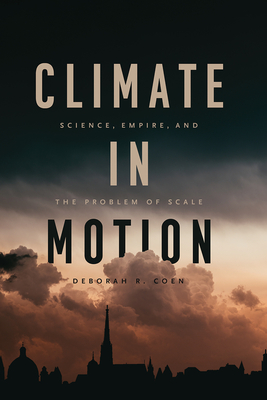 Climate in Motion: Science, Empire, and the Problem of Scale

Today, predicting the impact of human activities on the earth's climate hinges on tracking interactions among phenomena of radically different dimensions, from the molecular to the planetary. Climate in Motion shows that this multiscalar, multicausal framework emerged well before computers and satellites. Extending the history of modern climate science back into the nineteenth century, Deborah R. Coen uncovers its roots in the politics of empire-building in central and eastern Europe. She argues that essential elements of the modern understanding of climate arose as a means of thinking across scales in a state--the multinational Habsburg Monarchy, a patchwork of medieval kingdoms and modern laws--where such thinking was a political imperative. Led by Julius Hann in Vienna, Habsburg scientists were the first to investigate precisely how local winds and storms might be related to the general circulation of the earth's atmosphere as a whole. Linking Habsburg climatology to the political and artistic experiments of late imperial Austria, Coen grounds the seemingly esoteric science of the atmosphere in the everyday experiences of an earlier era of globalization. Climate in Motion presents the history of modern climate science as a history of scaling--that is, the embodied work of moving between different frameworks for measuring the world. In this way, it offers a critical historical perspective on the concepts of scale that structure thinking about the climate crisis today and the range of possibilities for responding to it.
Climate in Motion: Science, Empire, and the Problem of Scale

Deborah R. Coen is a historian of science whose research focuses on the modern physical and environmental sciences and on central European intellectual and cultural history. She earned an A.B. in Physics from Harvard, an M.Phil. in History and Philosophy of Science from Cambridge, and a Ph.D. in History of Science from Harvard, where she was also a Junior Fellow of the Society of Fellows. Before coming to Yale, she taught for ten years in the History Department at Barnard College and was Director of Research Clusters for the Columbia Center for Science and Society. At Yale she is also a member of the steering committee of the Environmental Humanities Initiative.

One of the questions driving Professor Coen’s research is how scientists cope with uncertainty. Her first book, Vienna in the Age of Uncertainty: Science, Liberalism, and Private Life (2007), centered on an extraordinary scientific dynasty, the Exner-Frisch family. Contrary to typical accounts of fin-de-siècle central Europe, the Exners reveal a strain of Austrian liberalism that was (literally) at home with modernist subjectivity and uncertainty.

Vienna in the Age of Uncertainty won the Susan Abrams Prize from the University of Chicago Press, the Barbara Jelavich Prize from the Association for Slavic, East European, and Eurasian Studies, and the Austrian Cultural Forum Book Prize. Professor Coen has pursued her interest in the history of private life in articles such as “The Common World: Histories of Science and Domestic Intimacy,” Modern Intellectual History 11 (2014): 417-438.

Professor Coen’s recent research has explored the production of environmental knowledge. In 2013 she published The Earthquake Observers: Disaster Science from Lisbon to Richter, which examines seismology’s history as a form of “citizen science.” In the nineteenth century, standing networks of seismic observers transformed earthquakes into natural experiments at the nexus of human behavior and planetary physics. The Earthquake Observers was a finalist for the Turku Book Prize from the European Society for Environmental History; click here to read a review in The Times Higher Education or The Los Angeles Review of Books.

Her latest book is Climate in Motion: Science, Empire, and the Problem of Scale (2018), winner of the 2019 Pfizer Award from the History of Science Society in recognition of an outstanding book dealing with the history of science. Climate in Motion is the first study of the science of climate dynamics before the computer age.

Professor Coen argues that essential elements of the modern understanding of climate arose as a means of thinking across scales of space and time, in a state—the multinational Habsburg Monarchy, a bricolage of medieval kingdoms and modern laws—where such thinking was a political imperative. Linking Habsburg climatology to the political and artistic experiments of late imperial Austria, Climate in Motion grounds the seemingly esoteric science of the atmosphere in the everyday experiences of an earlier era of globalization.

Recently, thanks to a Mellon New Directions Fellowship, Professor Coen has been studying the physical and social science of climate change. Her goal is to acquire the knowledge and skills necessary to bring history to bear on some of the implicitly historical questions that anthropogenic climate change raises: questions about environmental and social justice, about the rights of future generations, and about the relationship between scientific expertise and traditional forms of knowledge.

In 2020-‘21 Professor Coen is a co-PI for “The Order of Multitudes: Atlas, Encyclopedia, Museum,” a year-long series of events at Yale sponsored by the Mellon Sawyer Seminar program. 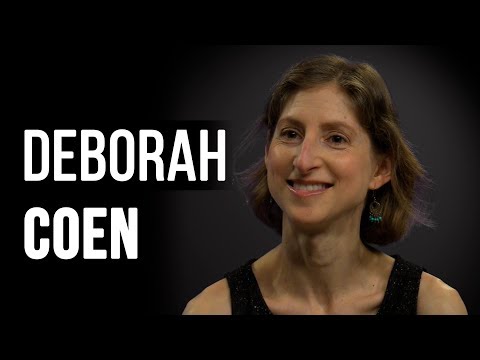