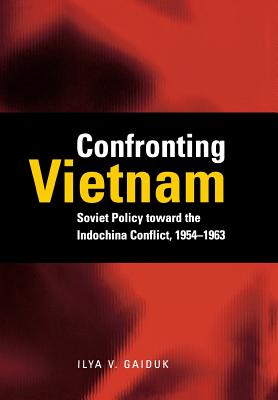 Based on extensive research in the Russian archives, this book examines the Soviet approach to the Vietnam conflict between the 1954 Geneva conference on Indochina and late 1963, when the overthrow of the South Vietnamese president Ngo Dinh Diem and the assassination of John F. Kennedy radically transformed the conflict.

The author finds that the USSR attributed no geostrategic importance to Indochina and did not want the crisis there to disrupt d�tente. The Russians had high hopes that the Geneva accords would bring years of peace in the region. Gradually disillusioned, they tried to strengthen North Vietnam, but would not support unification of North and South. By the early 1960s, however, they felt obliged to counter the American embrace of an aggressively anti-Communist regime in South Vietnam and the hostility of its former ally, the People's Republic of China. Finally, Moscow decided to disengage from Vietnam, disappointed that its efforts to avert an international crisis there had failed.

Sixty years have passed since the day when in San Francisco representatives of 51 countries, by signing the Charter, laid the foundation of the United Nations, an organization that at the moment symbolized the success of freedom-loving nations in World War II and their determination to prevent the repetition of deadly conflicts in the future by means of peaceful cooperation.

However, the debates about the United Nations as a relevant and useful instrument of world politics remain today no less passionate than in 1945, when the nations tried to overcome their historical resistance to surrendering a part of their national sovereignty to a supranational body. The organization is accused in that it has never been efficient and constructive before and even less so, contrary to expectations, now, when, with the end of the Cold War more chances seem to have appeared for a full-scale cooperation between states in the name of peace and security in the world.

Most people are talking about reforming the United Nations. But many insist on abandoning it as wholly irrelevant and a waste of taxpayers' money. They point to the fact that in the past the United Nations failed to demonstrate its effectiveness by being able to help resolve only less than a dozen conflicts out of about twenty-five that took place in the world arena during the Cold War, and today, in the situation when only one real power is left in the world, there is no need for such an organization.

Who is right in these debates? Was the United Nations as ineffective in the past as it is often portrayed, and is there any prospect to improve it by adjusting the U.N. structure and activities to the situation in today's politics and to future developments? As it often happens with clashes over present-day issues, the study of history may serve as a valuable source for finding answers to this and many other questions. Hence my interest in the history of the United Nations.

This interest grew out of my study of the Cold War during the last ten years or more. While analyzing Soviet policy toward the war in Vietnam, I was surprised how negligible was the role of the United Nations in the efforts to settle this conflict. In the 1950s the only occasion when the organization spoke of itself in the conflict in Indochina was the situation in Laos, where a U.N. commission was dispatched to investigate allegations about North Vietnam's support of local Communist insurgency.

In the 1960s, after the United States had begun its direct intervention in the conflict, UN Secretary General U Thant occasionally put forward initiatives to find a peaceful solution of the war. But his efforts led nowhere, mostly because of Hanoi's rejection of UN mediation and the lack of desire on the part of the great powers, primarily the United States and the Soviet Union, to involve the organization in the peace process. Since the U.N.'s role was minimal in Vietnam, which became one of the major armed conflicts in the Cold War, I decided to find out how much it contributed to the settlement of other crises during that period, to analyze the factors that in the past prevented the United Nations from being a real force aimed against war and instability, and to explore whether the same factors do not influence the United Nations' role in the post-Cold War period.

I am planning to do this by studying and comparing policies toward the United Nations of the two principal powers who were the leaders of the opposing Cold War blocs and the principal co-founders of the organization-—the United States and the Soviet Union. The release of previously classified archival documents in both countries has facilitated this task.

In addition to the desire to make a contribution to the literature on the U.N., which is surprisingly poor of historical studies based on archival sources, I cherish a hope to uncover evidence that would help to find a solution to the problems that the United Nations faces today, a solution which may require the reforming of not only the United Nations itself, but also of policy toward this organization pursued by its leading member-states.

Ilya V. Gaiduk, who died in 2011 during the completion of this book, was a Senior Research Fellow, Institute of World History, Russian Academy of Sciences, Moscow. He had been a Fellow at the Woodrow Wilson Center in 2005-6. He was also the author of Confronting Vietnam: Soviet Policy toward the Indochina Conflict, 1954-1963, which was published in 2003 in the Cold War International History Project series.