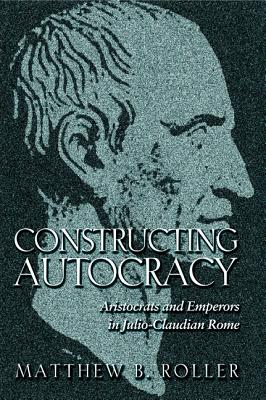 Rome's transition from a republican system of government to an imperial regime comprised more than a century of civil upheaval and rapid institutional change. Yet the establishment of a ruling dynasty, centered around a single leader, came as a cultural and political shock to Rome's aristocracy, who had shared power in the previous political order. How did the imperial regime manage to establish itself and how did the Roman elites from the time of Julius Caesar to Nero make sense of it? In this compelling book, Matthew Roller reveals a dialogical process at work, in which writers and philosophers vigorously negotiated and contested the nature and scope of the emperor's authority, despite the consensus that he was the ultimate authority figure in Roman society.

Roller seeks evidence for this thinking out of the new order in a wide range of republican and imperial authors, with an emphasis on Lucan and Seneca the Younger. He shows how elites assessed the impact of the imperial system on traditional aristocratic ethics and examines how several longstanding authority relationships in Roman society--those of master to slave, father to son, and gift-creditor to gift-debtor--became competing models for how the emperor did or should relate to his aristocratic subjects. By revealing this ideological activity to be not merely reactive but also constitutive of the new order, Roller contributes to ongoing debates about the character of the Roman imperial system and about the politics of literature.

Professor Roller has broad interests in the relationship between monumentality and memory in ancient Rome, in the moral philosophy of the younger Seneca, and in Roman reciprocity and social exchange. He is particularly interested in aristocratic competition in ancient Rome, and how that competition develops and changes from the middle Republic to the high Empire.  His current book-scale project is an investigation of the arenas of competitive eloquence in the early Imperial period, from the Augustan age into the 2nd century CE.

Professor Roller’s research has been supported by major awards from the Institute for Research in the Humanities at the University of Wisconsin-Madison, the American Council of Learned Societies, and the Alexander von Humboldt Foundation; he has also received smaller awards from diverse funders to support particular projects.

Professor Roller has been a faculty member at Johns Hopkins University since 1994. His service to the institution includes chairing the Classics Department for seven years and the Anthropology Department for one year. Also, from 2012 to 2014 he led the Krieger School of Arts and Sciences’ decennial accreditation effort, and from 2015 to 2020 he served as Vice Dean for Graduate Education and Centers & Programs in the Krieger School of Arts and Sciences.