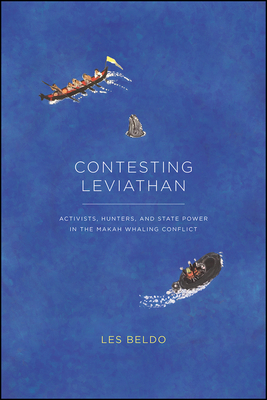 In 1999, off the coast of the Pacific Northwest, the first gray whale in seven decades was killed by Makah whalers. The hunt marked the return of a centuries-old tradition and, predictably, set off a fierce political and environmental debate. Whalers from the Makah Indian Tribe and antiwhaling activists have clashed for over twenty years, with no end to this conflict in sight. In Contesting Leviathan, anthropologist Les Beldo describes the complex judicial and political climate for whale conservation in the United States, and the limits of the current framework in which whales are treated as large fish managed by the National Marine Fisheries Service. Emphasizing the moral dimension of the conflict between the Makah, the US government, and antiwhaling activists, Beldo brings to light the lived ethics of human-animal interaction, as well as how different groups claim to speak for the whale--the only silent party in this conflict. A timely and sensitive study of a complicated issue, this book calls into question anthropological expectations regarding who benefits from the exercise of state power in environmental conflicts, especially where indigenous groups are involved. Vividly told and rigorously argued, Contesting Leviathan will appeal to anthropologists, scholars of indigenous culture, animal activists, and any reader interested in the place of animals in contemporary life.
Contesting Leviathan: Activists, Hunters, and State Power in the Makah Whaling Conflict