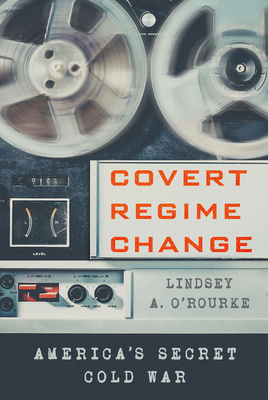 States seldom resort to war to overthrow their adversaries. They are more likely to attempt to covertly change the opposing regime, by assassinating a foreign leader, sponsoring a coup d'�tat, meddling in a democratic election, or secretly aiding foreign dissident groups.

In Covert Regime Change, Lindsey A. O'Rourke shows us how states really act when trying to overthrow another state. She argues that conventional focus on overt cases misses the basic causes of regime change. O'Rourke provides substantive evidence of types of security interests that drive states to intervene. Offensive operations aim to overthrow a current military rival or break up a rival alliance. Preventive operations seek to stop a state from taking certain actions, such as joining a rival alliance, that may make them a future security threat. Hegemonic operations try to maintain a hierarchical relationship between the intervening state and the target government. Despite the prevalence of covert attempts at regime change, most operations fail to remain covert and spark blowback in unanticipated ways.

Covert Regime Change assembles an original dataset of all American regime change operations during the Cold War. This fund of information shows the United States was ten times more likely to try covert rather than overt regime change during the Cold War. Her dataset allows O'Rourke to address three foundational questions: What motivates states to attempt foreign regime change? Why do states prefer to conduct these operations covertly rather than overtly? How successful are such missions in achieving their foreign policy goals?

Lindsey O’Rourke joined Boston College’s Political Science department in autumn 2014. Her research interests include international relations theory, U.S. foreign policy, international security, and military strategy. She is currently completing a book manuscript on the causes, conduct, and consequences of U.S.-orchestrated covert regime changes during the Cold War, as well as a series of related articles on the impact of regime change on interstate relations.

Before joining the faculty at Boston College, O’Rourke was a post-doctoral research fellow at the Dickey Center for International Understanding at Dartmouth College and a pre-doctoral fellow at the Institute for Security and Conflict Studies at George Washington University. She has a Ph.D. in Political Science and an M.A. in International Relations from the University of Chicago.