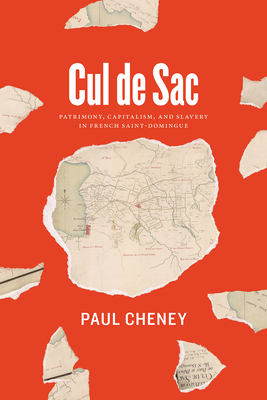 In the eighteenth century, the Cul de Sac plain in Saint-Domingue, now Haiti, was a vast open-air workhouse of sugar plantations. This microhistory of one plantation owned by the Ferron de la Ferronnayses, a family of Breton nobles, draws on remarkable archival finds to show that despite the wealth such plantations produced, they operated in a context of social, political, and environmental fragility that left them weak and crisis prone.

Focusing on correspondence between the Ferronnayses and their plantation managers, Cul de Sac proposes that the Caribbean plantation system, with its reliance on factory-like production processes and highly integrated markets, was a particularly modern expression of eighteenth-century capitalism. But it rested on a foundation of economic and political traditionalism that stymied growth and adaptation. The result was a system heading toward collapse as planters, facing a series of larger crises in the French empire, vainly attempted to rein in the inherent violence and instability of the slave society they had built. In recovering the lost world of the French Antillean plantation, Cul de Sac ultimately reveals how the capitalism of the plantation complex persisted not as a dynamic source of progress, but from the inertia of a degenerate system headed down an economic and ideological dead end.

Paul Cheney is an historian of Europe with a specialization in old regime France and its colonial empire. Before beginning his PhD training in history at Columbia University, he studied political economy at the New School for Social Research. He has taught at Columbia University, the European College of Liberal Arts (Berlin), and the Queen's University of Belfast.

The unifying element of Professor Cheney’s work is an interest in early modern capitalism, and in particular the problem of how modern social and political forms gestated within traditional society. Old regime France serves as an excellent case study in this problem because of the way in which it combined real economic dynamism with deep-seated political and social impediments to growth. He addresses France’s integration into a globalized early modern economy in a methodology diverse way, drawing on intellectual, economic, and social history.

His first book, Revolutionary Commerce: Globalization in the French Monarchy (Harvard University Press, 2010), examined how French philosophes, merchants, and administrators understood the adaptability of the French monarchy to the modernizing forces of primitive globalization.

Currently, he is working on a second book entitled, Cul de Sac: Patrimony, Capitalism, and Slavery in French Saint-Domingue (University of Chicago Press, 2017), a micro-history of one plantation in France’s richest colony. He has published in such journals as The William and Mary Quarterly, Past & Present, Dix-Huitième siècle, and Les Annales historiques de la révolution française.

Source: The University of Chicago