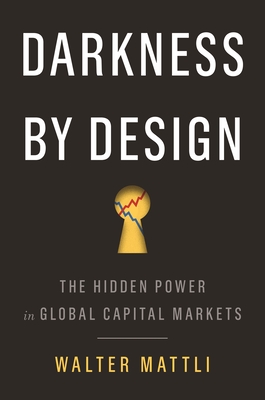 Darkness by Design: The Hidden Power in Global Capital Markets

Capital markets have undergone a dramatic transformation in the past two decades. Algorithmic high-speed supercomputing has replaced traditional floor trading and human market makers, while centralized exchanges that once ensured fairness and transparency have fragmented into a dizzying array of competing exchanges and trading platforms. Darkness by Design exposes the unseen perils of market fragmentation and dark markets, shedding critical light on how the redistribution of power and influence has created new winners and losers in capital markets. Essential reading for anyone with money in the stock market, this compelling book challenges the conventional view of markets and reveals the troubling implications of unchecked market power for the health of the global economy and society as a whole.

Darkness by Design: The Hidden Power in Global Capital Markets

I have held fellowships at the Wissenschaftskolleg (Institute for Advanced Studies) in Berlin, Princeton University and the European University Institute in Florence.

In 1995, I was awarded the Helen Dwight Reid Award of the American Political Science Association, in 2003 the JP Morgan International Prize in Finance Policy and Economics of the American Academy in Berlin, in 2006 a two-year British Academy Research Fellowship and in 2015 a British Academy/Leverhulme Trust Senior Research Fellowship. I am co-editor (with Liesbeth Hooghe and Gary Marks) of a new book series with Oxford University Press titled Transformations in Governance. I am a member of the Editorial Boards of the Review of International Political Economy and the European Journal of Political Research and also serve on the Executive Board of Regulation & Governance.