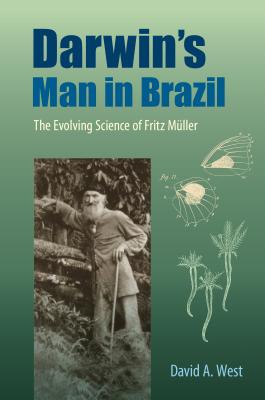 Darwin's Man in Brazil: The Evolving Science of Fritz M�ller

Fritz M�ller (1821-1897), though not as well known as his colleague Charles Darwin, belongs in the cohort of great nineteenth-century naturalists. Recovering M�ller's legacy, David A. West describes the close intellectual kinship between M�ller and Darwin and details a lively correspondence that spanned seventeen years. The two scientists, despite living on separate continents, often discussed new research topics and exchanged groundbreaking ideas that unequivocally moved the field of evolutionary biology forward. M�ller was unique among naturalists testing Darwin's theory of natural selection because he investigated an enormous diversity of plants and animals, corresponded with prominent scientists, and published important articles in Germany, England, the United States, and Brazil. Darwin frequently praised M�ller's powers of observation and interpretation, counting him among those scientists whose opinions he valued most. Despite the importance and scope of his work, however, M�ller is known for relatively few of his discoveries. West remedies this oversight, chronicling the life and work of this remarkable and overlooked man of science.
Darwin's Man in Brazil: The Evolving Science of Fritz M�ller

David A. West (1933–2015) was associate professor emeritus of biological sciences at Virginia Tech and the author of Fritz Müller: A Naturalist in Brazil.

West came to Virginia Tech in 1962 where he taught biology and genetics until his retirement in 1998.

West was born and spent his childhood in Beirut, where his father and grandfather both taught at the American University of Beirut, according to his obituary posted on the McCoy Funeral Home website.

West married Lindsay Lattimore Butte in New York City in 1958. He attended Cornell University to study ornithology, graduating with a doctoral degree in 1959, according to his obituary.

In retirement, West pursued interests in music, reading, travel, and the local mountains with wilderness designation for additional areas in the Jefferson National Forest including Brush Mountain, his obituary said.