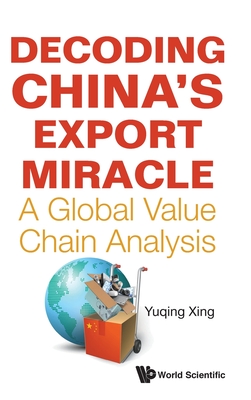 In less than three decades, China has emerged as the world's largest exporting nation with more than $2 trillion exports annually. China's quick rise as a leading exporter in the world is an unprecedented miracle. There are many theories explaining this miracle. This book adopts the global value chain (GVC) approach to analyze the Chinese export miracle over the last four decades. It focuses on the tasks rather than the gross export value and emphasizes the organizations of modern trade rather than the national comparative advantage. The GVC approach systematically explains how, in less than four decades China has evolved from a closed economy to the world's No. 1 exporting nation; why China, a developing country, has exported more high-technology products than labor-intensive products to the US; and why almost half of the US trade deficit has originated from China.The book identifies three spillover effects of GVCs that originated from brands, technology and product innovation, and distribution and retail networks of GVCs lead firms. It argues that China's deep integration with GVCs has been a decisive factor for China's emergence as the world's No.1 exporting nation and the champion of high-technology exports. In addition, this book uses iPhone trade and the operation of Apple, the largest factory-less American manufacturer, to explain how current trade statistics exaggerate China's exports to and its trade surplus with the US on the one hand, and underestimate US exports on the other hand.By using the experience of the Chinese mobile phone industry, the book argues that the GVC strategy can be a short-cut for developing countries to achieve industrialization and enable firms of developing countries to enter high-technology sectors despite their intrinsic disadvantages. At this end, the book also discusses the future trajectory of China-centered GVCs under the shadow of the US-China trade war and the COVID-19 pandemic.
Decoding China's Export Miracle: A Global Value Chain Analysis

Yuqing Xing is a Professor of Economics of the National Graduate Institute for Policy Studies (GRIPS) in Tokyo.

Prof. Xing received his bachelor’s and master’s degrees from Peking University, China, and a Ph.D. in Economics from the University of Illinois at Urbana-Champaign, USA.