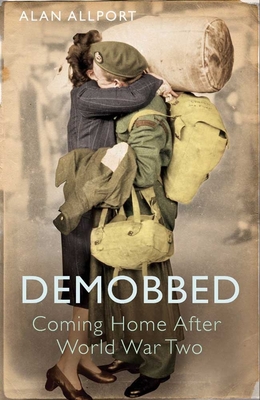 The trials, troubles and triumphs of returning home after the end of World War Two.

What happened when millions of British servicemen were demobbed--demobilized--after World War II? Most had been absent for years, and the joy of arrival was often clouded with ambivalence, regrets, and fears. Returning soldiers faced both practical and psychological problems, from reasserting their place in the family home to rejoining a much-altered labor force. Civilians worried that their homecoming heroes had been barbarized by their experiences and would bring crime and violence back from the battlefield. Drawing on personal letters and diaries, newspapers, reports, novels, and films, Alan Allport illuminates the darker side of the homecoming experience for ex-servicemen, their families, and society at large--a gripping story that's in danger of being lost to national memory.

Alan Allport specializes in the history of Britain in the period of the two world wars. His most recent book, Britain at Bay: The Epic Story of the Second World War 1938-1941 was published by Knopf (North America) and Profile (UK) in 2020.

Writing in the Wall Street Journal, Professor Paul Kennedy of Yale University said that "Britain at Bay ... might be the single best examination of British politics, society and strategy in these four years that has ever been written."

It was a Sunday Times (London) history book of the year and a finalist for the 2020 RUSI Duke of Wellington Medal for Military History. Professor Allport's previous two books are Browned Off and Bloody-Minded: The British Soldier Goes to War 1939-1945 which was published by Yale University Press in 2015 and Demobbed: Coming Home After the Second World War, published by Yale in 2009, which won the Longman-History Today Book of the Year Award.

He is currently writing a sequel to Britain at Bay provisionally titled Advance Britannia: The Epic Story of the Second World War 1942-1945.  Professor Allport is interested in hearing from any potential graduate students interested in studying 20th century Britain and the history of the two world wars.