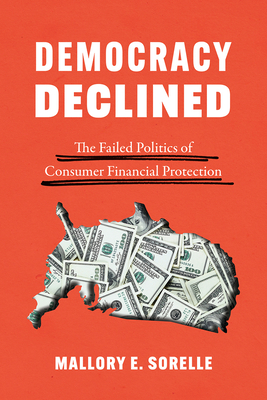 As Elizabeth Warren memorably wrote, It is impossible to buy a toaster that has a one-in-five chance of bursting into flames and burning down your house. But it is possible to refinance an existing home with a mortgage that has the same one-in-five chance of putting the family out on the street. More than a century after the government embraced credit to fuel the American economy, consumer financial protections in the increasingly complex financial system still place the onus on individuals to sift through fine print for assurance that they are not vulnerable to predatory lending and other pitfalls of consumer financing and growing debt.
In Democracy Declined, Mallory E. SoRelle argues that the failure of federal policy makers to curb risky practices can be explained by the evolution of consumer finance policies aimed at encouraging easy credit in part by foregoing more stringent regulation. Furthermore, SoRelle explains how angry borrowers' experiences with these policies teach them to focus their attention primarily on banks and lenders instead of demanding that lawmakers address predatory behavior. As a result, advocacy groups have been mostly unsuccessful in mobilizing borrowers in support of stronger consumer financial protections. The absence of safeguards on consumer financing is particularly dangerous because the consequences extend well beyond harm to individuals--they threaten the stability of entire economies. SoRelle identifies pathways to mitigate these potentially disastrous consequences through greater public participation.
Democracy Declined: The Failed Politics of Consumer Financial Protection

Mallory is an assistant professor of public policy at the Sanford School of Public Policy at Duke University. Her research and teaching explore how public policies are produced by, and critically how they reproduce, socioeconomic and political inequality in the United States.

Mallory holds a Ph.D. in Government from Cornell University, an M.P.P. from Harvard University’s Kennedy School of Government, and a B.A. with honors from Smith College. She has worked in both electoral politics and consumer advocacy.