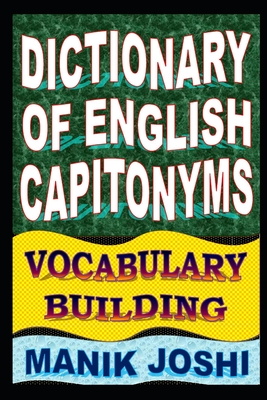 What are Capitonyms? --CAPITONYMS ---- [Capital- capital letter; -Onym: Name] - Capitonym is a word that changes its meaning (and sometimes pronunciation) based on whether or not it is capitalized. - Capitonym [singular] - Capitonyms [plural] - Capitonyms may be nouns, pronouns, verbs, or adjectives. - Characteristics of Capitonyms: Same spelling except for capitalization; Different meaning when capitalized; Same or different pronunciation - Examples: Polish and polish - Polish: connected with Poland [adjective], polish: to make a surface smooth and glossy [verb] - Piedmonts and piedmonts - Piedmont: a region of North West Italy (noun); piedmont: a slope leading from the foot of mountains to a region of flat land (noun) - Traveler and traveler - Traveler: traveling people of Irish origin [noun]; traveler: a person who is traveling [noun] - Roman and roman - Roman: connected with the Rome; roman: the ordinary type of printing [adjective] - Rosemary and rosemary - Rosemary: a common first name for females in English speaking countries [noun]; rosemary: a bush with small narrow leaves that smell sweet and are used in cooking as a herb [noun] - Regency and regency - Regency: in the style of the period 1811-20 in Britain [adjective]; regency: government by a regent (a person who rules a country in place of the king or queen) [noun] - Scot and scot - Scot: a native of Scotland [noun]; scot: a charge, tax, or payment [noun] - Self and self - Self: a popular American magazine [noun]; self: character or personality [noun] - Warren and warren - Warren: a common name in English speaking countries [noun]; warren: a system of holes and underground tunnels where wild rabbits live [noun] ****** Capitonyms are case-sensitive words. However, when capitonyms appear at the beginning of a sentence, there is no way to understand which meaning is being referred to except the context in which they are used. Capitonyms also create confusion in the aspect of listening. Because there is no way to understand which meaning is being referred to except the context in which they are used. Capitonyms generally occurs due to one form being a proper noun. Proper noun is a word that is the name of a person, a place, an establishment, etc. and is written with a capital letter. Thus, capitonyms may include: A name of a person (Jack/jack); A name of a place, city, country, etc. (Japan/japan); A name of a language (Ewe/ewe); A name of a company (Fiat/fiat); A name of a publication (Time/time); A name of a river/lake/hill/mountain, etc.- DETAILED LIST OF PAIRS OF CAPITONYMS
Dictionary of English Capitonyms: Vocabulary Building