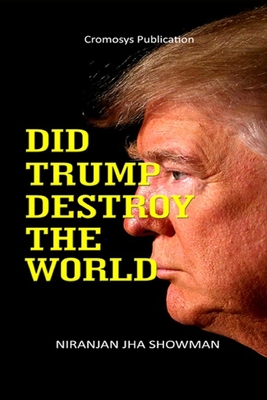 Did Trump Destroy the World

Even in now 2021, we are seeing with our own eyes what such a world looks like, with the global response to the pandemic a prime example. Since the contagion started in 2020, Trump remained in the light of international media delivering his speeches but he did nothing to stopping mortality. He should have been in medical research centers rather than the White House. In May 2020, as the worldwide death toll surpassed a quarter of a million people, leaders from all over the world joined by video-conference to coordinate efforts to raise money for an effective vaccine, but Trump paid no attention to the conference.To look into why, how and by whom the pandemical devastation started, we have to study our previous decade. Since 2010, probably even before, China's expanding manufacturing capacity became a threat to America and more than some countries of the world. No political yelp could ever diminish the Chinese business plan, and by the end of 2014, it became so serious that many countries came in the intertwinement of severe recession. Unemployment and bankruptcy started knocking the doors of many business centers across the world. The recession, which should be called 'financial blackout' was the mainreason of the victory of Modi in India and Trump in America. Even after their victory, the year 2018 was the worst for millions of companies across the globe and they were not able to survive anymore. So, in order to ward off China and bring an end to the financial blackout, the pandemic erupted and that was the master-plan of Trump and his allies.During contagion, in May 2020, the summit was organized by the European Union and ended with pledges of more than $8 billion, along with commitments by world leaders to pool their efforts to find and distribute effective medications against a virus from which none of their citizens were safe. Other than its virtual nature, it was the kind of gathering we have always envisioned when we picture global cooperation to deal with a major emergency but for one striking fact: the absence of the world's richest and most powerful country, the United States. In the midst of the kind of global crisis that would usually lead much of the world to look to Washington for leadership, the chair normally reserved for the United States was empty. This is quite evident to say that Trump wanted the world to suffer and decay. Donald Trump probably wished for an incarnation of a recession-free America and the world with revived economy, and for this, he let the havoc continue for the entire year of 2020. But his dream doomed his candidature in election 2020, and the question still persists - did Trump destroy the world or he rolled back the world where it should have been?
Did Trump Destroy the World