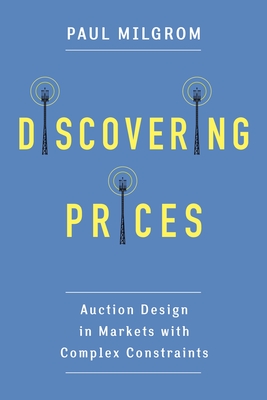 Traditional economic theory studies idealized markets in which prices alone can guide efficient allocation, with no need for central organization. Such models build from Adam Smith's famous concept of an invisible hand, which guides markets and renders regulation or interference largely unnecessary. Yet for many markets, prices alone are not enough to guide feasible and efficient outcomes, and regulation alone is not enough, either. Consider air traffic control at major airports. While prices could encourage airlines to take off and land at less congested times, prices alone do just part of the job; an air traffic control system is still indispensable to avoid disastrous consequences. With just an air traffic controller, however, limited resources can be wasted or poorly used. What's needed in this and many other real-world cases is an auction system that can effectively reveal prices while still maintaining enough direct control to ensure that complex constraints are satisfied. In Discovering Prices, Paul Milgrom--the world's most frequently cited academic expert on auction design--describes how auctions can be used to discover prices and guide efficient resource allocations, even when resources are diverse, constraints are critical, and market-clearing prices may not even exist. Economists have long understood that externalities and market power both necessitate market organization. In this book, Milgrom introduces complex constraints as another reason for market design. Both lively and technical, Milgrom roots his new theories in real-world examples (including the ambitious U.S. incentive auction of radio frequencies, whose design he led) and provides economists with crucial new tools for dealing with the world's growing complex resource-allocation problems.
Discovering Prices: Auction Design in Markets with Complex Constraints