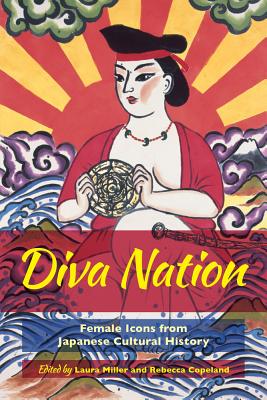 Diva Nation explores the constructed nature of female iconicity in Japan. From ancient goddesses and queens to modern singers and writers, this edited volume critically reconsiders the female icon, tracing how she has been offered up for emulation, debate or censure. The research in this book culminates from curiosity over the insistent presence of Japanese female figures who have refused to sit quietly on the sidelines of history. The contributors move beyond archival portraits to consider historically and culturally informed diva imagery and diva lore. The diva is ripe for expansion, fantasy, eroticization, and playful reinvention, while simultaneously presenting a challenge to patriarchal culture. Diva Nation asks how the diva disrupts or bolsters ideas about nationhood, morality, and aesthetics.
Diva Nation: Female Icons from Japanese Cultural History

Dr. Laura Miller received her Ph.D. from the University of California, Los Angeles, in 1988. She came to UMSL in August 2010. Endowed Chair in Japanese Studies.

After graduation from the University of California, Santa Barbara with BA degrees in Anthropology and Asian Studies, Dr. Miller taught English and supervised an English language program for Teijin Educational Systems in Osaka, Japan (1977-1981). She began teaching anthropology in the 1980s in Los Angeles, and has been a faculty member at several universities. At UMSL, she will teach new courses on Japanese culture and linguistic anthropology.

Dr Miller is currently working on two new book projects. Japanese Girl Stuff builds on multiple interests and expertise in linguistic anthropology, Japanese popular culture, and gender and media. She is also co-editing (with Alisa Freedman and Christine Yano) the volume Modern Girls on the Go: Gender, Mobility, and Labor in Japan, a collection which crosses the fields of history, anthropology, literature, and visual studies, investigating the lived experiences and cultural depictions of women who worked in service industries related to ideas of mobility.