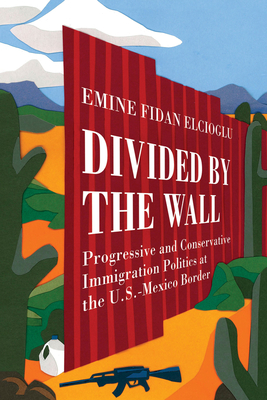 Divided by the Wall: Progressive and Conservative Immigration Politics at the U.S.-Mexico Border

The construction of a wall on the U.S.-Mexico border--whether to build it or not--has become a hot-button issue in contemporary America. A recent impasse over funding a wall caused the longest government shutdown in U.S. history, sharpening partisan divisions across the nation. In the Arizona borderlands, groups of predominantly white American citizens have been mobilizing for decades--some help undocumented immigrants bypass governmental detection, while others help law enforcement agents to apprehend immigrants. Activists on both the left and the right mobilize without an immediate personal connection to the issue at hand, many doubting that their actions can bring about the long-term change they desire. Why, then, do they engage in immigration and border politics so passionately?

Divided by the Wall offers a one-of-a-kind comparative study of progressive pro-immigrant activists and their conservative immigration-restrictionist opponents. Using twenty months of ethnographic research with five grassroots organizations, Emine Fidan Elcioglu shows how immigration politics has become a substitute for struggles around class inequality among white Americans. She demonstrates how activists mobilized not only to change the rules of immigration but also to experience a change in themselves. Elcioglu finds that the variation in social class and intersectional identity across the two sides mapped onto disparate concerns about state power. As activists strategized ways to transform the scope of the state's power, they also tried to carve out self-transformative roles for themselves. Provocative and even-handed, Divided by the Wall challenges our understanding of immigration politics in times of growing inequality and insecurity.

Divided by the Wall: Progressive and Conservative Immigration Politics at the U.S.-Mexico Border

Professor Elcioglu’s research focuses on immigration political struggles as a way to explore the relationship between dominant and dominated groups; as well as the relationship between state and civil society under conditions of growing inequality. Most recently, she is the author of Divided by the Wall: Progressive and Conservative Immigration Politics at the U.S.-Mexico Border (2020, University of California Press).

Based on 20 months of immersive research, Divided by the Wall ethnographically mines the meanings of the contentious immigration debate for activists on opposite sides of the political spectrum. In particular, her book combines the insights of political sociology and race studies to shed light on why and how ordinary Americans collectively mobilize to change immigration and border policy--even when they don't necessarily believe that their actions will make a difference.

Professor Elcioglu’s current research builds on her ongoing interest in how and why citizens mobilize around non-citizenship, and what their mobilization says about the societies they inhabit. Supported by the Connaught New Researcher Award from the University of Toronto, she is currently working on an interview-based project that explores the political experiences of private refugee sponsors in Canada.