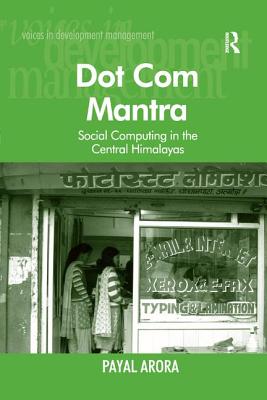 Billions of dollars are being spent nationally and globally on providing computing access to digitally disadvantaged groups and cultures with an expectation that computers and the Internet can lead to higher socio-economic mobility. This ethnographic study of social computing in the Central Himalayas, India, investigates alternative social practices with new technologies and media amongst a population that is for the most part undocumented. In doing so, this book offers fresh and critical perspectives in areas of contemporary debate: informal learning with computers, cyberleisure, gender access and empowerment, digital intermediaries, and glocalization of information and media.
Dot Com Mantra: Social Computing in the Central Himalayas