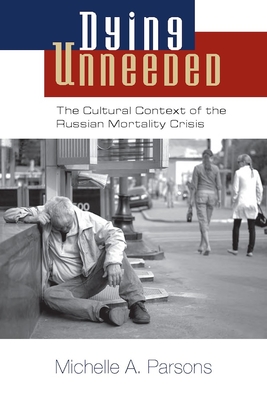 Dying Unneeded: The Cultural Context of the Russian Mortality Crisis

In the early 1990s, Russia experienced one of the most extreme increases in mortality in modern history. Men's life expectancy dropped by six years; women's life expectancy dropped by three. Middle-aged men living in Moscow were particularly at risk of dying early deaths. While the early 1990s represent the apex of mortality, the crisis continues. Drawing on fieldwork in the capital city during 2006 and 2007, this account brings ethnography to bear on a topic that has until recently been the province of epidemiology and demography. Middle-aged Muscovites talk about being unneeded (ne nuzhny), or having little to give others. Considering this concept of being unneeded reveals how political economic transformation undermined the logic of social relations whereby individuals used their position within the Soviet state to give things to other people. Being unneeded is also gendered--while women are still needed by their families, men are often unneeded by state or family. Western literature on the mortality crisis focuses on a lack of social capital, often assuming that what individuals receive is most important, but being needed is more about what individuals give. Social connections--and their influence on health--are culturally specific. In Soviet times, needed people helped friends and acquaintances push against the limits of the state, crafting a sense of space and freedom. When the state collapsed, this sense of bounded freedom was compromised, and another freedom became deadly.This book is a recipient of the annual Norman L. and Roselea J. Goldberg Prize for the best project in the area of medicine.
Dying Unneeded: The Cultural Context of the Russian Mortality Crisis

My central focus is the application of sociocultural anthropology to health inequality and global/public health practice. More specifically I am interested in how political economy gives rise to social relations which, in turn, influence health and health research/interventions.

My first project applied ethnographic methods to the Russian mortality crisis of the 1990s, which is the subject of a substantial epidemiology literature. My book Dying Unneeded: The Cultural Context of the Mortality Crisis revolves around the gendered idea of being unneeded–having nothing to offer others. I explore how being unneeded relates to the concept of social capital and its use in quantitative analyses.

I am currently working on an ethnography of a global health project, addressing perinatal healthcare, surveillance, and donor ethics. I am also developing a project on mortality disparities in the Northern Arizona context which will use both quantitative and qualitative methods.

I have done global health research on HIV/AIDS testing and counseling, medication use, menopause, and reported health at Harvard School of Public Health and the World Health Organization.