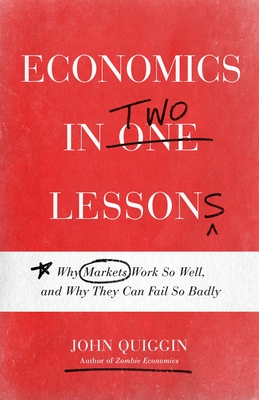 Since 1946, Henry Hazlitt's bestselling Economics in One Lesson has popularized the belief that economics can be boiled down to one simple lesson: market prices represent the true cost of everything. But one-lesson economics tells only half the story. It can explain why markets often work so well, but it can't explain why they often fail so badly--or what we should do when they stumble. As Nobel Prize-winning economist Paul Samuelson quipped, When someone preaches 'Economics in one lesson, ' I advise: Go back for the second lesson. In Economics in Two Lessons, John Quiggin teaches both lessons, offering a masterful introduction to the key ideas behind the successes--and failures--of free markets.

Economics in Two Lessons explains why market prices often fail to reflect the full cost of our choices to society as a whole. For example, every time we drive a car, fly in a plane, or flick a light switch, we contribute to global warming. But, in the absence of a price on carbon emissions, the costs of our actions are borne by everyone else. In such cases, government action is needed to achieve better outcomes.

Two-lesson economics means giving up the dogmatism of laissez-faire as well as the reflexive assumption that any economic problem can be solved by government action, since the right answer often involves a mixture of market forces and government policy. But the payoff is huge: understanding how markets actually work--and what to do when they don't.

Brilliantly accessible, Economics in Two Lessons unlocks the essential issues at the heart of any economic question.

John Quiggin is a Professor in Economics at The University of Queensland and is prominent both as a research economist and as a commentator on Australian economic policy. He is a Fellow of the Econometric Society, the Academy of the Social Sciences in Australia and many other learned societies and institutions.

He has produced over 1500 publications, including six books and over 250 journal articles, in fields including decision theory, environmental economics, production economics, and the theory of economic growth. He has also written on policy topics including climate change, micro-economic reform, privatisation, employment policy and the management of the Murray-Darling river system.

His latest book, Economics in Two Lessons: Why Markets Work so Well, and Why They Can Fail So Badly, was released in 2019 by Princeton University Press.

Source: The University of Queensland