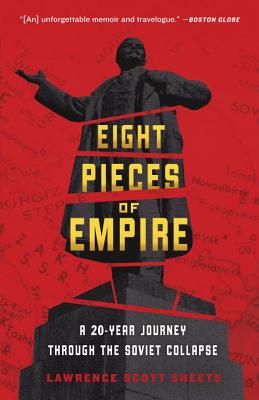 Eight Pieces of Empire: A 20-Year Journey Through the Soviet Collapse

Not with a bang, but with a quiet, ten-minute address on Christmas Day, 1991: this is how the Soviet Union met its end. But in the wake of that one deceptively calm moment, conflict and violence soon followed. Some of the emergent new countries began to shed totalitarianism while other sought to revive their own dead empires or were led by ex-Soviet leaders who built equally or even more repressive political machines. Since the late 1980s, Sheets lived and reported from the former USSR and saw firsthand the reverberations of the empire's collapse. Eight Pieces of Empire draws readers into the people, politics and day-to-day life, painting a vivid portrait of a tumultuous time.

Sheets' stories about people living through these tectonic shifts of fortune--a trio of female saboteurs in Chechnya, the chaos of newly independent Georgia in the early 1990s, young hustlers eager to strike it rich in the post-Soviet economic vacuum--reveal the underreported and surprising ways in which the ghosts of empire still haunt these lands and the world.

Eight Pieces of Empire: A 20-Year Journey Through the Soviet Collapse

Lawrence Scott Sheets spent more than two decades in former Soviet Union as a journalist for Reuters and NPR. Sheets is a graduate of Michigan State University International Studies & Programs.