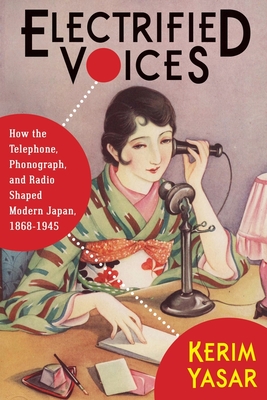 Long before karaoke's ubiquity and the rise of global brands such as Sony, Japan was a place where new audio technologies found eager users and contributed to new cultural forms. In Electrified Voices, Kerim Yasar traces the origins of the modern soundscape, showing how the revolutionary nature of sound technology and the rise of a new auditory culture played an essential role in the formation of Japanese modernity.

A far-reaching cultural history of the telegraph, telephone, phonograph, radio, and early sound film in Japan, Electrified Voices shows how these technologies reshaped the production of culture. Audio technologies upended the status of the written word as the only source of prestige while revivifying traditional forms of orality. The ability to reproduce and transmit sound, freeing it from the constraints of time and space, had profound consequences on late nineteenth-century language reform; twentieth-century literary, musical, and cinematic practices; the rise of militarism and nationalism in the 1920s and 30s; and the transition to the postwar period inaugurated by Emperor Hirohito's declaration of unconditional surrender to Allied forces--a declaration that was recorded on a gramophone record and broadcast throughout the defeated Japanese empire. The first cultural history in English of auditory technologies in modern Japan, Electrified Voices enriches our understanding of Japanese modernity and offers a major contribution to sound studies and global media history.

I specialize in modern Japanese literature and cinema, media history, and translation studies. My first book, Electrified Voices: How the Telephone, Phonograph, and Radio Shaped Modern Japan, 1868-1945 (Columbia University Press, 2018), examines the roles played by the telegraph, telephone, phonograph, radio, and sound film in the discursive, aesthetic, and ideological practices of Japan from 1868 to 1945.

My second project, tentatively entitled Gestures in Light: The Body in Japanese Cinema, is a critical and theoretical meditation on physical expressivity and representations of the body in Japanese film from the silent era to the early twenty-first century; at the same time, it offers a concise history of the development of film acting as a performance tradition in Japan. In addition to this research,

I am active as a translator in a variety of genres and media, from contemporary novels to pre-modern poetry to the subtitles for more than a hundred feature films in the Criterion Collection/Janus Films library, including classic works by directors such as Kurosawa Akira, Ozu Yasujiro, and Oshima Nagisa. Prior to coming to USC, I taught at Ohio State, Notre Dame, and Boston University, and was a postdoctoral fellow in the Society of Fellows in the Liberal Arts at Princeton University.