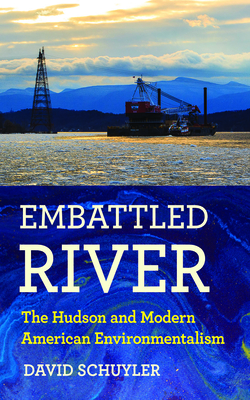 In Embattled River, David Schuyler describes the efforts to reverse the pollution and bleak future of the Hudson River that became evident in the 1950s. Through his investigative narrative, Schuyler uncovers the critical role of this iconic American waterway in the emergence of modern environmentalism in the United States.

Writing fifty-five years after Consolidated Edison announced plans to construct a pumped storage power plant at Storm King Mountain, Schuyler recounts how a loose coalition of activists took on corporate capitalism and defended the river. As Schuyler shows, the environmental victories on the Hudson had broad impact. In the state at the heart of the story, the immediate result was the creation in 1970 of the New York State Department of Environmental Conservation to monitor, investigate, and litigate cases of pollution. At the national level, the environmental ferment in the Hudson Valley that Schuyler so richly describes contributed directly to the creation of the Environmental Protection Agency in 1970, the passage of the Clean Water Act in 1972, and the creation of the Superfund in 1980 to fund the cleanup of toxic-dumping sites.

With these legal and regulatory means, the contest between environmental advocates and corporate power has continued well into the twenty-first century. Indeed, as Embattled River shows, the past is prologue. The struggle to control the uses and maintain the ecological health of the Hudson River persists and the stories of the pioneering advocates told by Schuyler provide lessons, reminders, and inspiration for today's activists.

David P. Schuyler, one of the foremost experts on the creation New York’s Central Park, Frederick Law Olmsted, and the history of the urban parks movement, died on 24 July 2020 after suffering an aneurysm in his home in Lancaster, Pennsylvania. Schuyler had been a member of the Urban History Association since its founding in 1989.

Schuyler wrote and edited ten books and numerous articles, the most influential being The New Urban Landscape: The Redefinition of City Form in Nineteenth-Century America (1986) and four volumes of the Frederick Law Olmsted Papers, which were published over the course of Schuyler’s career. His Apostle of Taste: Andrew Jackson Downing, 1815-1852 (1996) is generally considered the definitive work on one of the founders of landscape architecture in the United States. Schuyler’s publications were the recipients of numerous awards, including the Richard B. Morris Prize 1979 (for the best dissertation at Columbia University), the Dixon Ryan Fox Prize of the New York State Historical Association in 2011 (for the best book manuscript on New York state history), the Victorian Society’s Ruth Emery Award in 2013 (for the best book on American regional history), and the Herbert Lehman Prize for Distinguished Scholarship in New York History in 2014.

Schuyler served in multiple capacities on editorial boards of a variety of publications, including the Journal of Planning History, the Hudson River Valley Review, the Frederick Law Olmstead Papers, and the North American Landscape series at The Johns Hopkins University Press.

Schuyler was also a prominent public historian, particularly in regards to historic preservation and Hudson River valley environmental protection. He was an outspoken advocate of preserving what he called the “tangible remains of the past,” exemplified by his service on behalf of the Olana Historic Site, originally the home of the landscape artist Frederic Edwin Church. In 2018, Schuyler was rewarded for his service with the Olana Partnership’s Frederic Church Award for outstanding contributions to American culture. Schuyler was also an energetic board member of the Pennsylvania Historical and Museum Commission, the Pennsylvania State Historic Preservation Board, and the New York Academy of History. From 1997 to 1999, he was the elected president of the Society for American City and Regional Planning History (SACRPH).

Schuyler was born in Albany, New York, on 9 April 1950 and grew up in Newburgh, New York. He taught at Franklin & Marshall College in Lancaster, Pa., for nearly his entire career, beginning in 1979 and shortly after completing his Ph.D. at Columbia University where he studied under the tutelage of Kenneth T. Jackson and Eric McKitrick. He earned bachelor’s and master’s degrees from American University and the Winterthur Program in Early American Culture, respectively. At his death, he was the Arthur and Katherine Shadek Professor of Humanities and American Studies.

Colleagues and students at Franklin & Marshall recognized Schuyler as a devoted and dynamic teacher, known for his popular seminars in urban, environmental, and local history in which he integrated his original and sometimes path-breaking research. Schuyler envisioned the role of the historian to be a seamless balance between teaching and writing. A City Transformed: Redevelopment, Race, and Suburbanization in Lancaster, Pennsylvania, 1940-1980 (2002) and a book on the revitalization or gentrification of Lancaster since 1980, which he was writing at the time of this death, were by-products of Schuyler’s work in the classroom, as were his most recent books Sanctified Landscape: Writers, Artists, and the Hudson River Valley, 1820-1902 (2012) and Embattled River: The Hudson and Modern American Environmentalism (2018). In these classes and books, Schuyler uncovered the mutually-shared beliefs and environmental interests of such disparate writers and artists such as Thomas Cole, Washington Irving, and Andrew Jackson Downing, all of whom transformed the public perception of the Hudson River Valley and ideas about the New York landscape. In recent years, Schuyler’s students produced innovative digital projects on the history of Lancaster. Schuyler’s teaching was recognized not only at Franklin & Marshall where he was the recipient of the Bradley R. Dewey Award (2003), but also with teaching awards from the Mary F. Lindbeck Foundation (1994) and the Lawrence C. Gerkens Award from the Society for American City and Regional Planning History (2003).

Schuyler was preceded in death by his wife Marsha Sener Schuyler (2002), his mother Ruth Calyer, his father John Barry Schuyler, and his stepfather Gordon Cote. He is survived by his daughter, Nancy Sener Schuyler of Lancaster, nine sisters and brothers, fifteen nieces and nephews, thirteen grand nieces and nephews and numerous cousins. Among urban historians, and especially once-younger members of the UHA and SACRPH, Schuyler was known for his generosity of time, personal support for young scholars facing professional challenges, and an all-too-uncommon willingness to read, edit, and comment on the manuscripts of others. He was a model of selflessness to the multiple communities of which he was a part. David Schuyler’s sense of humor, warm friendship, and enduring fellowship will be sorely missed by those of us who had the privilege to know him.