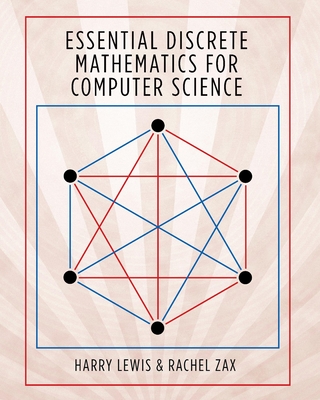 A more intuitive approach to the mathematical foundation of computer science

Discrete mathematics is the basis of much of computer science, from algorithms and automata theory to combinatorics and graph theory. This textbook covers the discrete mathematics that every computer science student needs to learn. Guiding students quickly through thirty-one short chapters that discuss one major topic each, this flexible book can be tailored to fit the syllabi for a variety of courses.

Proven in the classroom, Essential Discrete Mathematics for Computer Science aims to teach mathematical reasoning as well as concepts and skills by stressing the art of proof. It is fully illustrated in color, and each chapter includes a concise summary as well as a set of exercises. The text requires only precalculus, and where calculus is needed, a quick summary of the basic facts is provided.

Essential Discrete Mathematics for Computer Science is the ideal introductory textbook for standard undergraduate courses, and is also suitable for high school courses, distance education for adult learners, and self-study.

During the Vietnam War, Harry Lewis served for two years as a commissioned officer of the US Public Health Service. He served at the National Institutes of Health in Bethesda, Maryland, doing work on image processing and on systems and application programming. He spent the academic year 1970-71 in Europe as Frederick Sheldon Traveling Fellow of Harvard University. Lewis returned to Harvard to begin his graduate study in the fall of 1971 and was awarded the PhD in Applied Mathematics in 1974. His PhD thesis was written under the direction of philosophy professor Burton Dreben, on the subject of computational unsolvability in mathematical logic.

Upon receiving his PhD, Lewis joined the Harvard faculty. He became Gordon McKay Professor of Computer Science in 1981. From 2003–2008 he was honored with the title of Harvard College Professor in honor of his teaching excellence.

Lewis is the author of numerous books and articles on various aspects of computer science. In the years since he joined the faculty in 1974, he has helped launch thousands of Harvard undergraduates into careers in computer science. His book about higher education, Excellence Without a Soul: Does Liberal Education Have a Future? has appeared in a paperback edition (PublicAffairs, 2007). The hardcover edition was a Boston Globe best-seller and the subject of favorable reviews in both the Boston Globe and the Wall Street Journal. It has been translated into Chinese (in both Taiwanese and mainland editions) and Korean. A book on the origins and public consequences of the digital information flood, coauthored with Hal Abelson and Ken Ledeen, appeared in 2008 (Blown to Bits: Your Life, Liberty, and Happiness After the Digital Explosion, Addison-Wesley). It has been translated into Russian (under the title Ataka Bitov) and Chinese. His most recent book, co-edited with Ellen Condliffe Lagemann, is entitled What is College For? Lewis travels regularly to Hong Kong, where he serves as an external examiner for the Common Core Curriculum of Hong Kong University, and he has written several articles for the South China Morning Post.

From 1995-2003 Lewis served as Dean of Harvard College. In this capacity he oversaw the undergraduate experience, including residential life, career services, public service, academic and personal advising, athletic policy, and intercultural and race relations. He is a long time member of the College’s Admissions Committee. In addition to teaching a variety of courses in Computer Science, Lewis offers a Freshman Seminar on Amateur Athletics, exploring the social history of sports in America and especially at Harvard.

Lewis has been married since 1968 to Marlyn McGrath. They live in Brookline, Massachusetts and Bigfork, Montana and have two daughters, Elizabeth and Anne. Lewis is a graduate of the Roxbury Latin School, the oldest school in continuous existence in North America (founded 1645). When he is not worrying about the state of American education or the unforeseen consequences of digital technology, he worries instead about the Red Sox.