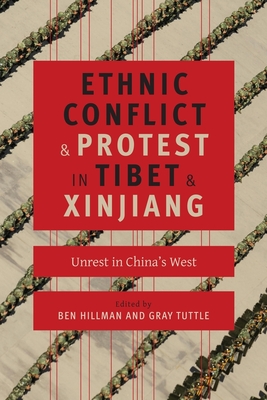 Ethnic Conflict and Protest in Tibet and Xinjiang: Unrest in China's West

Despite more than a decade of rapid economic development, rising living standards, and large-scale improvements in infrastructure and services, China's western borderlands are awash in a wave of ethnic unrest not seen since the 1950s. Through on-the-ground interviews and firsthand observations, the international experts in this volume create an invaluable record of the conflicts and protests as they have unfolded--the most extensive chronicle of events to date. The authors examine the factors driving the unrest in Tibet and Xinjiang and the political strategies used to suppress them. They also explain why certain areas have seen higher concentrations of ethnic-based violence than others.

Essential reading for anyone struggling to understand the origins of unrest in contemporary Tibet and Xinjiang, this volume considers the role of propaganda and education as generators and sources of conflict. It links interethnic strife to economic growth and connects environmental degradation to increased instability. It captures the subtle difference between violence in urban Xinjiang and conflict in rural Tibet, with detailed portraits of everyday individuals caught among the pressures of politics, history, personal interest, and global movements with local resonance.

Ethnic Conflict and Protest in Tibet and Xinjiang: Unrest in China's West

Ben is author or editor of seven books, including a monograph on local politics in China Patronage and Power published by Stanford University Press (2014), an edited volume on Ethnic Protest and Conflict in Tibet and Xinjiang published by Columbia University Press (2016), an edited volume on the China Dream published by ANU Press (2020) and a collection of essays on authoritarian rule in China (World Scientific Press, 2022). He is currently working on a new book about the Communist Party of China.

Ben is Co-Editor of The China Journal, which is published by University of Chicago Press. He is also an Editor at East Asia Forum, and head of the Politics, Policy and Society Research Program at the Australian Centre on China in the World.