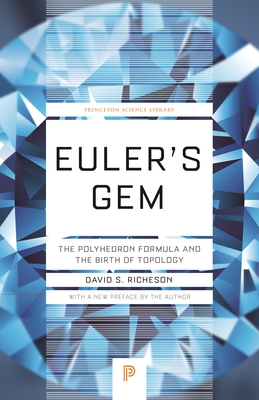 Euler's Gem: The Polyhedron Formula and the Birth of Topology

How a simple equation reshaped mathematics

Leonhard Euler's polyhedron formula describes the structure of many objects--from soccer balls and gemstones to Buckminster Fuller's buildings and giant all-carbon molecules. Yet Euler's theorem is so simple it can be explained to a child. From ancient Greek geometry to today's cutting-edge research, Euler's Gem celebrates the discovery of Euler's beloved polyhedron formula and its far-reaching impact on topology, the study of shapes. Using wonderful examples and numerous illustrations, David Richeson presents this mathematical idea's many elegant and unexpected applications, such as showing why there is always some windless spot on earth, how to measure the acreage of a tree farm by counting trees, and how many crayons are needed to color any map. Filled with a who's who of brilliant mathematicians who questioned, refined, and contributed to a remarkable theorem's development, Euler's Gem will fascinate every mathematics enthusiast. This paperback edition contains a new preface by the author.
Euler's Gem: The Polyhedron Formula and the Birth of Topology

I am a professor of mathematics and the John J. Curley ’60 and Ann Conser Curley ’63 Faculty Chair in the Liberal Arts at Dickinson College.

I graduated from Hamilton College in 1993 with a degree in mathematics, and I received a Ph.D. in mathematics from Northwestern University in 1998. I came to Dickinson after a postdoctoral position at Michigan State University.

I am passionate about many areas of mathematics, but my research focuses on dynamical systems, topology, the history of mathematics, and recreational mathematics. I am the author of Tales of Impossibility: The 2000-Year Quest to Solve the Mathematical Problems of Antiquity (2019) and Euler’s Gem: The Polyhedron Formula and the Birth of Topology (2008), both of which were published by Princeton University Press. I was the editor of Math Horizons, the undergraduate magazine of the Mathematical Association of America, from 2014 to 2019. I enjoy chatting about mathematics on my blog (Division by Zero) and on Twitter (@divbyzero).