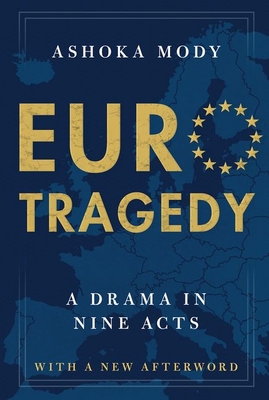 Eurotragedy: A Drama in Nine Acts

Blending economic analysis with political drama, EuroTragedy -chosen by both Foreign Affairs and The Financial Times as one of the best books of 2018-is a groundbreaking account of the euro's history and tragic consequences. In this vivid and compelling chronicle, Ashoka Mody describes how the euro improbably emerged through a narrow historical window as a flawed compromise wrapped in a false pro-European rhetoric of peace and unity. Drawing on his frontline experience as an official with the IMF, Mody situates the tragedy in a fast-paced global context and guides the reader through the forced-and unforced-errors Eurozone authorities committed during their long financial crisis. The decision to switch from national currencies to the euro unfolded as both economic and political tragedy. It weakened the growth potential of member states, which made financially vulnerable Europeans more anxious. It deepened perceptions of unfairness and widened the division between nations. Now, the burden falls on younger Europeans, a generation with a discouragingly bleak future. A compassionate view of European possibilities, EuroTragedy makes clear that the euro's structural flaws will continue to haunt the continent. Instead of centralizing authority to prop up an ossified pro-Europeanist model, it is time to loosen ties that bind too tightly so that a liberal order can once more flourish. Now updated to cover the most momentous events since original publication, this will remain the authoritative book on the crisis.
Eurotragedy: A Drama in Nine Acts

He is author of EuroTragedy: A Drama in Nine Acts. Previously, Professor Mody was Deputy Director in the International Monetary Fund’s Research and European Departments. He has worked at the World Bank, AT&T’s Bell Laboratories, and the Centre for Development Studies, Trivandrum.

He has been a Visiting Professor at the University of Pennsylvania’s Wharton School and is a non-resident fellow at the Center for Financial Studies, Frankfurt. He received his Ph.D. in Economics from Boston University.