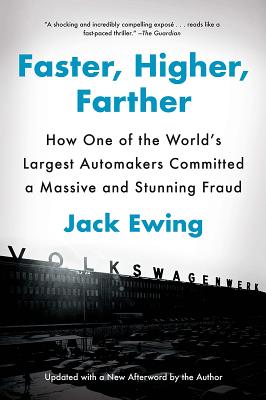 Faster, Higher, Farther: How One of the World's Largest Automakers Committed a Massive and Stunning Fraud

Faster, Higher, Farther chronicles a corporate scandal that rivals those at Enron and Lehman Brothers--one that will cost Volkswagen more than $22 billion in fines and settlements. Through meticulous reporting, New York Times correspondent Jack Ewing documents why VW felt compelled to install defeat devices in diesel vehicles that unlawfully lowered CO2 levels during emissions testing, and how the fraud was committed, covered up, and finally detected. Faster, Higher, Farther is a briskly written account of unrivaled corporate greed. Updated with the latest information and a new afterword by the author.

Faster, Higher, Farther: How One of the World's Largest Automakers Committed a Massive and Stunning Fraud

Jack Ewing writes about business, banking, economics and monetary policy from Frankfurt, and sometimes helps out on terrorism coverage and other breaking news.

Mr. Ewing joined The International Herald Tribune, now the international edition of The New York Times, in 2010. Previously, he worked for a decade at BusinessWeek magazine in Frankfurt, where he was European regional editor. He first came to Europe in 1993 as a German Marshall Fund journalism fellow in Brussels, and wound up staying permanently.

Mr. Ewing won a New York Times publisher’s award in 2011 for coverage of the European debt crisis. He is the author of “Faster, Higher, Farther: The Volkswagen Scandal,” published in 2017 by W.W. Norton.