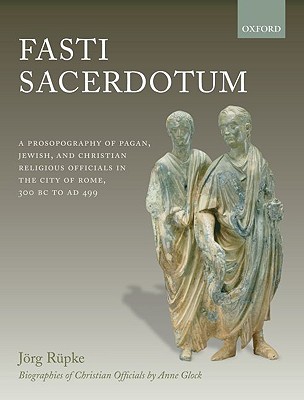 Fasti Sacerdotum: A Prosopography of Pagan, Jewish, and Christian Religious Officials in the City of Rome, 300 BC to Ad 499

This magisterial compilation personalizes and historicizes the history of religion in the city of Rome. After introductory essays on the documentary sources for the various Greek, Roman, Oriental, Jewish, and Christian cults in question, there are yearly lists of religious office-holders of various kinds, followed by 4,000 biographies of individuals who fulfilled ritual, organizational, or doctrinal roles. Concluding chapters discuss important aspects of Roman religion and its relationship with the state. The data assembled here will open up many new perspectives: on the social place of religion and certain cults, on the interplay between different religious groups, and on the organizational history of individual cults. The volume as a whole signifies a major advance in our understanding of ancient religions.
Fasti Sacerdotum: A Prosopography of Pagan, Jewish, and Christian Religious Officials in the City of Rome, 300 BC to Ad 499