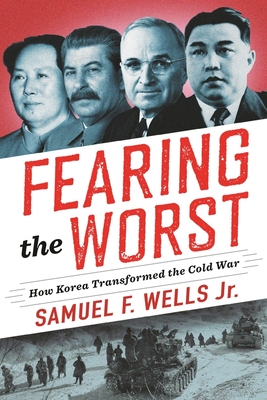 Fearing the Worst: How Korea Transformed the Cold War

After World War II, the escalating tensions of the Cold War shaped the international system. Fearing the Worst explains how the Korean War fundamentally changed postwar competition between the United States and the Soviet Union into a militarized confrontation that would last decades. Samuel F. Wells Jr. examines how military and political events interacted to escalate the conflict. Decisions made by the Truman administration in the first six months of the Korean War drove both superpowers to intensify their defense buildup. American leaders feared the worst-case scenario--that Stalin was prepared to start World War III--and raced to build up strategic arms, resulting in a struggle they did not seek out or intend. Their decisions stemmed from incomplete interpretations of Soviet and Chinese goals, especially the belief that China was a Kremlin puppet. Yet Stalin, Mao, and Kim Il-sung all had their own agendas, about which the United States lacked reliable intelligence. Drawing on newly available documents and memoirs--including previously restricted archives in Russia, China, and North Korea--Wells analyzes the key decision points that changed the course of the war. He also provides vivid profiles of the central actors as well as important but lesser known figures. Bringing together studies of military policy and diplomacy with the roles of technology, intelligence, and domestic politics in each of the principal nations, Fearing the Worst offers a new account of the Korean War and its lasting legacy.
Fearing the Worst: How Korea Transformed the Cold War

Samuel F. Wells has taught at both Wellesley College and the University of North Carolina at Chapel Hill.  At the Wilson Center, he founded the International Security Studies Program in 1977 and directed that program until 1985.  Since then he has served as Associate Director and Deputy Director of the Center while also serving as Director of West European Studies.