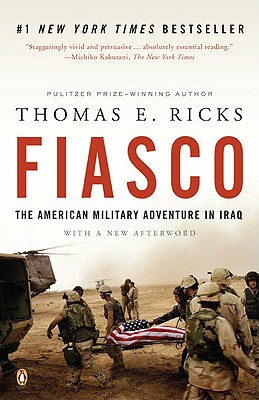 Finalist for the Pulitzer Prize
One of the Washington Post Book World's 10 Best Books of the Year
One of Time's 10 Best Books of the Year
USA Today's Nonfiction Book of the Year
A New York Times Notable Book The definitive account of the American military's tragic experience in Iraq Fiasco is a masterful reckoning with the planning and execution of the American military invasion and occupation of Iraq through mid-2006, now with a postscript on recent developments. Ricks draws on the exclusive cooperation of an extraordinary number of American personnel, including more than one hundred senior officers, and access to more than 30,000 pages of official documents, many of them never before made public. Tragically, it is an undeniable account--explosive, shocking, and authoritative--of unsurpassed tactical success combined with unsurpassed strategic failure that indicts some of America's most powerful and honored civilian and military leaders.
Fiasco: The American Military Adventure in Iraq, 2003 to 2005

Thomas E. Ricks is the author of Churchill and Orwell: The Fight for Freedom. He writes the "Best Defense" blog at Foreign Policy and is the military-history columnist at The New York Times Book Review.

Thomas E. Ricks covered the U.S. military for the Washington Post from 2000 through 2008 and was on the staff of the Wall Street Journal for seventeen years before that. He reported on American military operations in Somalia, Haiti, Korea, Bosnia, Kosovo, Macedonia, Kuwait, Turkey, Afghanistan and Iraq. A member of two Pulitzer Prize-winning teams, he is also the author of several books, including The Generals, The Gamble, Churchill & Orwell, and the number-one New York Times bestseller Fiasco, which was a finalist for the Pulitzer Prize. He wrote First Principles while a visiting fellow in history at Bowdoin College.

Source: Harper Collins and The Atlantic