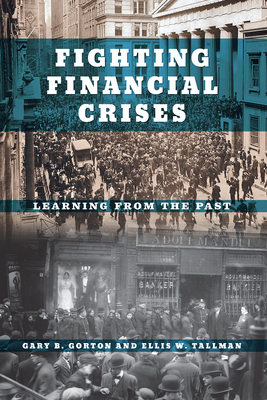 If you've got money in the bank, chances are you've never seriously worried about not being able to withdraw it. But there was a time in the United States, an era that ended just over a hundred years ago, when bank customers had to pay close attention to the solvency of the banking system, knowing they might have to rush to retrieve their savings before the bank collapsed. During the National Banking Era (1863-1913), before the establishment of the Federal Reserve, widespread banking panics were indeed rather common.

Yet these pre-Fed banking panics, as Gary B. Gorton and Ellis W. Tallman show, bear striking similarities to our recent financial crisis. Fighting Financial Crises thus turns to the past to better understand our uncertain present, investigating how panics during the National Banking Era played out and how they were eventually quelled and prevented. The authors then consider the Fed's and the SEC's reactions to the recent crisis, building an informative new perspective on how the modern economy works.

Gary B. Gorton is The Frederick Frank Class of 1954 Professor of Finance at the Yale School of Management, which he joined in August 2008. Prior to joining Yale, he was the Robert Morris Professor of Banking and Finance at The Wharton School of the University of Pennsylvania, where he taught from 1983 to 2008. Dr. Gorton has done research in many areas of finance and economics, including both theoretical and empirical work. He is the author of Slapped by the Invisible Hand: The Panic of 2007 (Oxford University Press) and Misunderstanding Financial Crises (Oxford University Press).