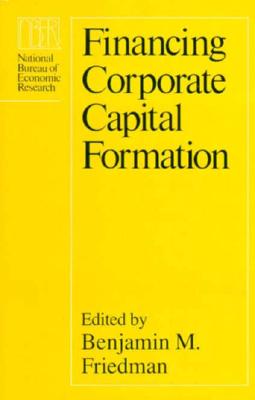 Six leading economists examine the financing of corporate capital formation in the U.S. economy. In clear and nontechnical terms, their papers provide valuable information for economists and nonspecialists interested in such questions as why interest rates are so high, why corporate debt has accelerated in recent years, and how government debt affects private financial markets.

Addressing these questions, the contributors focus chiefly on three themes: the actual use of debt and equity financing by corporations in recent years; the factors that drive the financial markets' pricing of debt and equity securities; and the relationship between corporations' real investment decisions and their financial decisions. While some of the papers are primarily expository, others break new ground. Extending his previous work, Robert Taggart finds a closer relationship between corporate and government debt than has been supposed. Zvi Bodie, Alex Kane, and Robert McDonald conclude in their study that the volatility of interest rates under the Volcker regime has led to a rise in real interest rates because of investors' demand for a greater risk premium. All of the papers present empirical findings in a useful analytical framework.

For its new findings and for its expert overview of issues central to an understanding of the U.S. economy, Financing Corporate Capital Formation should be of both historical and practical interest to students of economics and practitioners in the corporate and financial community.