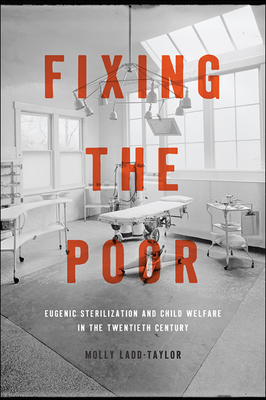 Fixing the Poor: Eugenic Sterilization and Child Welfare in the Twentieth Century

Between 1907 and 1937, thirty-two states legalized the sterilization of more than 63,000 Americans. In Fixing the Poor, Molly Ladd-Taylor tells the story of these state-run eugenic sterilization programs. She focuses on one such program in Minnesota, where surgical sterilization was legally voluntary and administered within a progressive child welfare system.

Tracing Minnesota's eugenics program from its conceptual origins in the 1880s to its official end in the 1970s, Ladd-Taylor argues that state sterilization policies reflected a wider variety of worldviews and political agendas than previously understood. She describes how, after 1920, people endorsed sterilization and its alternative, institutionalization, as the best way to aid dependent children without helping the undeserving poor. She also sheds new light on how the policy gained acceptance and why coerced sterilizations persisted long after eugenics lost its prestige. In Ladd-Taylor's provocative study, eugenic sterilization appears less like a deliberate effort to improve the gene pool than a complicated but sadly familiar tale of troubled families, fiscal and administrative politics, and deep-felt cultural attitudes about disability, dependency, sexuality, and gender.

Drawing on institutional and medical records, court cases, newspapers, and professional journals, Ladd-Taylor reconstructs the tragic stories of the welfare-dependent, sexually delinquent, and disabled people who were labeled feebleminded and targeted for sterilization. She chronicles the routine operation of Minnesota's three-step policy of eugenic commitment, institutionalization, and sterilization in the 1920s and 1930s and shows how surgery became the price of freedom from a state institution. Combining innovative political analysis with a compelling social history of those caught up in Minnesota's welfare system, Fixing the Poor is a powerful reinterpretation of eugenic sterilization.

Fixing the Poor: Eugenic Sterilization and Child Welfare in the Twentieth Century