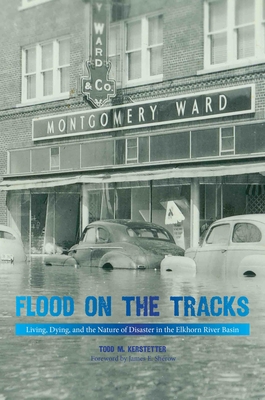 Flood on the Tracks: Living, Dying, and the Nature of Disaster in the Elkhorn River Basin

The Elkhorn River originates in north-central Nebraska and empties into the Platte River just west of Omaha. One of the first written records of the Elkhorn describes a flood. A flood hindered travel up the river by the valley's first non-Indian settlers. Decade after decade, floods have swept away mill dams, destroyed crops, drowned stock, soaked inventories, filled basements, undercut roads, washed out railroads and bridges, turned unfortunate riverside homes--even a dance hall--into unwieldy watercraft, and killed people. Everyone in the Elkhorn Valley agreed the Flood of 1944 was the worst in history. Until the deadly Flood of 2010 took the title. From a perspective unusual on the Great Plains--the problem of too much water--Flood on the Tracks offers an intimate portrait of life in the Elkhorn River Basin of northeast Nebraska. In a region often defined by aridity, rivers and their basins have provided sustenance, shelter, fertile soil, and overland highways. In many ways Plains rivers organize human lives. When they overflow, which they can be counted on to do, they disorganize them. Using Plains Indian winter counts, postcards, photographs, newspaper accounts, government records, and more, Flood on the Tracks chronicles the river's natural and human history from the Plains Indians into the twenty-first century. The Elkhorn's floods show us how the nature of disaster has changed and how Plainsfolk live--and die--with a river.
Flood on the Tracks: Living, Dying, and the Nature of Disaster in the Elkhorn River Basin