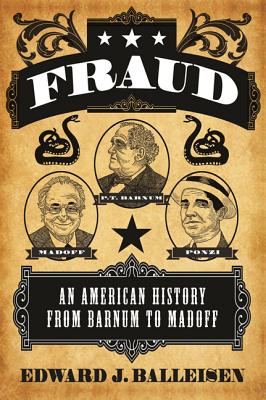 Fraud: An American History from Barnum to Madoff

A comprehensive history of fraud in America, from the early nineteenth century to the subprime mortgage crisis

In America, fraud has always been a key feature of business, and the national worship of entrepreneurial freedom complicates the task of distinguishing salesmanship from deceit. In this sweeping narrative, Edward Balleisen traces the history of fraud in America--and the evolving efforts to combat it--from the age of P. T. Barnum through the eras of Charles Ponzi and Bernie Madoff. This unprecedented account describes the slow, piecemeal construction of modern institutions to protect consumers and investors--from the Gilded Age through the New Deal and the Great Society. It concludes with the more recent era of deregulation, which has brought with it a spate of costly frauds, including corporate accounting scandals and the mortgage-marketing debacle. By tracing how Americans have struggled to foster a vibrant economy without encouraging a corrosive level of cheating, Fraud reminds us that American capitalism rests on an uneasy foundation of social trust.
Fraud: An American History from Barnum to Madoff

My research and writing explores the historical intersections among law, business, politics, and policy in the modern United States, with a particular focus on the origins, evolution, and impacts of the modern regulatory state.  I have pursued a number of collaborative projects with historians and other social scientists who study regulatory governance in industrialized and industrializing societies.

My most recent book is Fraud: An American History from Barnum to Madoff (Princeton University Press, 2017).  Economic duplicity has bedeviled American markets from the founding of the Republic.  In this wide-ranging history, I emphasize the enduring connections between capitalist innovation and business fraud, as well as the vexed efforts by private organizations and state agencies to curb the worst economic deceptions.  Placing recent fraud scandals in long-term context, I argue that we rely solely on a policy of caveat emptor at our peril; and that a mixture of public education, sensible disclosure rules, and targeted enforcement campaigns can contain the problem of business fraud.  Fraud received the 2018 Ralph Gomory Prize from the Business History Conference.

A growing proportion of my writing engages interdisciplinary debates about the nature of regulatory policy more generally, as well as the evolution of dominant approaches to political economy in modern capitalist societies. This dimension of my scholarship led to the publication of Government and Markets: Toward a New Theory of Regulation (Cambridge University Press, 2010), which I edited along with the historian David Moss. This volume brings together several new conceptual approaches to regulatory governance from across the social sciences. It also lays out a wide-ranging research agenda for regulatory studies.

In 2015, my sole-edited three-volume multidisciplinary research collection, Business Regulation, came out with Edward Elgar.  This collection includes a long introductory essay, “The Dialectics of Modern Regulatory Governance,” that conceptualizes the emergence of the modern regulatory state in the nineteenth-century and its evolution since then, often in response to powerful critiques from scholars and regulated businesses.  It then provides over 100 leading writings on key aspects of regulatory governance, with selections that range from 1869 to the 2010s, and from across the social sciences.

Along with Duke colleagues and collaborators Jonathan Wiener, Lori Bennear, and Kim Krawiec, I have co-edited another recent interdisciplinary volume that examines when and how industrialized democracies reconfigure regulatory institutions in the aftermath of major crises.  This book, Policy Shock: Recalibrating Risk and Regulation after Oil Spills, Nuclear Accidents, and Financial Crises, came out with Cambridge University Press in 2017.

Since 2015, I have served as Duke’s Vice Provost for Interdisciplinary Studies, working with university-wide institutes and initiatives to foster collaborative, interdisciplinary research, teaching, and engagement. In this capacity, I oversee Bass Connections, an innovative program that supports interdisciplinary, problem-centered research teams involving faculty, graduate students, and undergrads.  I also served as the PI on Duke’s “Versatile Humanists” project, funded by a Next Generation Implementation grant from the National Endowment for the Humanities.  This grant created a new model of complementary advising, established an internship program, fostered curricular innovation, and extended opportunities for doctoral students in the humanities to engage in collaborative research.