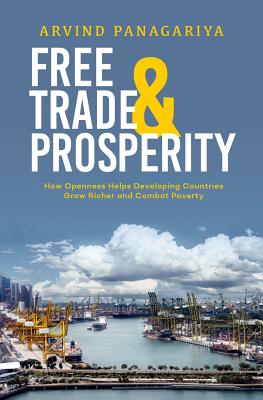 Arguments for protection and against free trade have seen a revival in developed countries such as the United States and Great Britain as well as developing countries such as India.� Given the clear benefits trade openness has brought everywhere, this is a surprising development.� The benefits of free trade are especially great for emerging market economies.

Free Trade and Prosperity offers the first full-scale defense of pro-free-trade policies with developing countries at its center. Arvind Panagariya, a professor at Columbia University and former top economic advisor to the government of India, supplies a historically informed analysis of many longstanding but flawed arguments for protection. He starts with an insightful overview of the positive case for free trade, and then closely examines the various contentions of protectionists. One protectionist argument is that infant industries need time to grow and become competitive, and thus should be sheltered. Other arguments are that emerging markets are especially prone to coordination failures, they are in need of diversification of their production structures, and they suffer from market imperfections. The panoply of protectionist arguments, including those for import substitution industrialization, fails when subject to close logical and empirical scrutiny.

Free trade and outward-oriented policies are preconditions to both sustained rapid growth and poverty alleviation in developing countries. Panagariya provides compelling evidence demonstrating the failures of protectionism and the promise of free trade using detailed case studies of successful countries such as Singapore, Taiwan, South Korea, China and India. Low or declining barriers to free trade and high or rising shares of trade in total income have been key elements in the sustained rapid growth and poverty alleviation in these countries and many others.

Free trade is like oxygen: the benefits are ubiquitous and not noticed until they are no longer there. This important book is an essential reminder of the costs of protectionism.

From January 2015 to August 2017, he served as the first Vice Chairman of the NITI Aayog, Government of India in the rank of a Cabinet Minister.  During these years, he also served as India’s G20 Sherpa and led the Indian teams that negotiated the G20 Communiqués during presidencies of Turkey (2015), China (2016) and Germany (2017).

Professor Panagariya is a former Chief Economist of the Asian Development Bank and was on the faculty of the Department of Economics at the University of Maryland at College Park from 1978 to 2003. During these years, he also worked with the World Bank, IMF and UNCTAD in various capacities. He holds a Ph.D. degree in Economics from Princeton University.

Professor Panagariya has authored more than fifteen books. His book India: The Emerging Giant (2008, OUP, New York) was listed as a top pick of 2008 by The Economist and described as the “definitive book on the Indian economy” by Fareed Zakaria of the CNN. The Economist has described his book, Why Growth Matters, (with Jagdish Bhagwati) as “a manifesto for policymakers and analysts.”

In March 2012, the Government of India honored Professor Panagariya with Padma Bhusan, the third highest civilian honors the country bestows in any field.