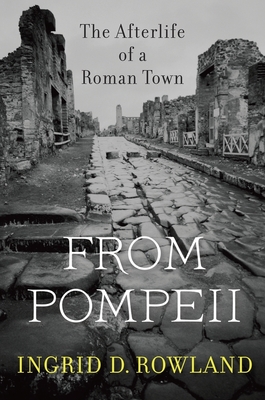 From Pompeii: The Afterlife of a Roman Town

When Vesuvius erupted in 79 CE, the force of the explosion blew the top right off the mountain, burying nearby Pompeii in a shower of volcanic ash. Ironically, the calamity that proved so lethal for Pompeii's inhabitants preserved the city for centuries, leaving behind a snapshot of Roman daily life that has captured the imagination of generations.

The experience of Pompeii always reflects a particular time and sensibility, says Ingrid Rowland. From Pompeii: The Afterlife of a Roman Town explores the fascinating variety of these different experiences, as described by the artists, writers, actors, and others who have toured the excavated site. The city's houses, temples, gardens--and traces of Vesuvius's human victims--have elicited responses ranging from awe to embarrassment, with shifting cultural tastes playing an important role. The erotic frescoes that appalled eighteenth-century viewers inspired Renoir to change the way he painted. For Freud, visiting Pompeii was as therapeutic as a session of psychoanalysis. Crown Prince Hirohito, arriving in the Bay of Naples by battleship, found Pompeii interesting, but Vesuvius, to his eyes, was just an ugly version of Mount Fuji. Rowland treats readers to the distinctive, often quirky responses of visitors ranging from Wolfgang Amadeus Mozart, Charles Dickens, and Mark Twain to Roberto Rossellini and Ingrid Bergman.

Interwoven throughout a narrative lush with detail and insight is the thread of Rowland's own impressions of Pompeii, where she has returned many times since first visiting in 1962.

From Pompeii: The Afterlife of a Roman Town

Prof. Ingrid Rowland writes and lectures on Classical Antiquity, the Renaissance, and the Age of the Baroque for general as well as specialist readers.

A frequent contributor to the New York Review of Books, she is the author of The Culture of the High Renaissance: Ancients and Moderns in Sixteenth-Century Rome (1998), The Scarith of Scornello: A Tale of Renaissance Forgery (2004), From Heaven to Arcadia (2005), Giordano Bruno, Philosopher/Heretic (2008), From Pompeii: The Afterlife of a Roman Town (2013), Villa Taverna (2014), and The Collector of Lives: Giorgio Vasari and the Invention of Art (2017) co-written with Noah Charney. In 2009, she was awarded the Society for Italian Historical Studies's Howard R. Marraro Prize for Giordano Bruno.

Rowland has also published translations of Vitruvius' Ten Books of Architecture (1999) and Giordano Bruno’s Italian dialogue On the Heroic Frenzies (2014), an edition of the correspondence of Agostino Chigi from a Vatican Library manuscript (2001), and the exhibition catalog The Ecstatic Journey: Athanasius Kircher in Baroque Rome (2000). Her latest book is The Divine Spark of Syracuse (2018).

As an Associate Professor of Art History at the University of Chicago, she received the Quantrell Award for Excellence in Undergraduate Teaching.

Prof. Rowland previously taught at UCLA and Columbia University, as well as in the Rome programs of St. Mary's College and the University of California, Irvine. After completing a BA in Classics at Pomona College, she earned her Master's and Ph.D. degrees in Greek Literature and Classical Archaeology at Bryn Mawr College.