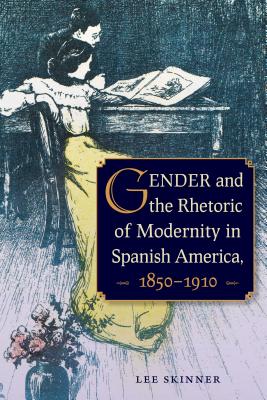 Gender and the Rhetoric of Modernity in Spanish America, 1850-1910

This ambitious volume shows how nineteenth-century Spanish American writers used the discourses of modernity to envision the place of women at all levels of social and even political life in the modern, utopian nation. Looking at texts ranging from novels and essays to newspaper articles and advertisements, and with special attention to public and private space, domesticity, education, technology, and work, Skinner identifies gender as a central concern at every level of society.
Gender and the Rhetoric of Modernity in Spanish America, 1850-1910

Lee Skinner, a leading scholar of Latin American literature and associate dean at one of the nation's leading liberal arts colleges, has been appointed to head Tulane University’s Newcomb-Tulane College, effective July 1. In addition to her role as dean of Newcomb-Tulane College, the academic home for all Tulane undergraduate students, Skinner will join the faculty of Tulane's Department of Spanish and Portuguese.

“Passionate about undergraduate education and student success, she has worked with faculty to implement new curricula, created programs that allow faculty and students to come together in new and meaningful ways, led several initiatives dedicated to creating a more diverse and inclusive educational environment, and oversaw a robust program of faculty advisors and mentors,” Fitts and Forman said.

Skinner said she was attracted to Tulane both for the opportunity to make a difference in the lives of its undergraduates and because of the university’s nationally renowned Latin American Studies program.

“I am deeply committed fundamentally to make undergraduate education the best possible experience for students from the moment they enter college until they finish their capstone. Helping shape and mold the experience of our undergrads is very exciting to me,” Skinner said. “I have a tremendous opportunity to oversee this process at Tulane, and I couldn’t be happier to be joining such a prestigious institution. I had known about Tulane because of its stature but especially because of its amazing Latin American Studies program. The intellectual caliber of its faculty and students is very high, and it will be a great intellectual home for my work.”

Skinner earned her bachelor’s degree in comparative literature from Brown University and her PhD in Spanish from Emory University. She served on the faculty of the University of Kansas and received tenure there before being recruited to the Department of Modern Languages and Literatures at Claremont McKenna in 2008.

A scholar of Latin American literature with a specialty in the study of national identity in 19th-century Spanish America, Skinner has authored two monographs, History Lessons: Refiguring the Nineteenth-Century Historical Novel in Spanish America (Newark, 2006) and Gender and the Rhetoric of Modernity in Spanish America, 1850-1910 (Gainesville: University Press of Florida, 2016). Skinner also received an award during her time at the University of Kansas for excellence in teaching.