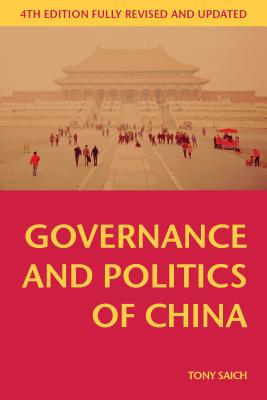 Governance and Politics of China

The success or failure of China's development will impact not only its own citizens but also those of the world. China is widely recognized as a global actor on the world stage and no global challenge can be resolved without its participation. Thus, it is important to understand how the country is ruled and what the policy priorities are of the new leadership. Can China move to a more market-based economy, while controlling environmental degradation? Can it integrate hundreds of millions of new migrants into the urban landscape? The tensions between communist and capitalist identities continue to divide society as China searches for a path to modernization.

The People's Republic is now over sixty-five years old - an appropriate juncture at which to reassess the state of contemporary Chinese politics. In this substantially revised fourth edition and essential guide to the subject, Tony Saich delivers a thorough introduction to all aspects of politics and governance in post-Mao China, taking full account of the changes of the Eighteenth Party Congress and the Twelfth National People's Congress. Further, the rise of Xi Jinping to power and his policies are examined as are important policy areas such as urbanization and the fight against corruption.

Governance and Politics of China