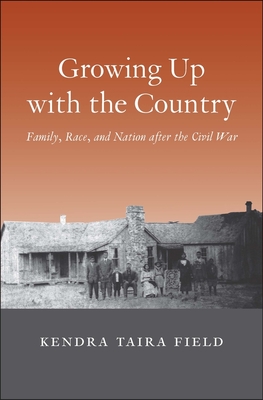 Growing Up with the Country: Family, Race, and Nation After the Civil War

The masterful and poignant story of three African-American families who journeyed west after emancipation, by an award-winning scholar and descendant of the migrants

Following the lead of her own ancestors, Kendra Field's epic family history chronicles the westward migration of freedom's first generation in the fifty years after emancipation. Drawing on decades of archival research and family lore within and beyond the United States, Field traces their journey out of the South to Indian Territory, where they participated in the development of black and black Indian towns and settlements.

When statehood, oil speculation, and Jim Crow segregation imperiled their lives and livelihoods, these formerly enslaved men and women again chose emigration. Some migrants launched a powerful back-to-Africa movement, while others moved on to Canada and Mexico. Their lives and choices deepen and widen the roots of the Great Migration. Interweaving black, white, and Indian histories, Field's beautifully wrought narrative explores how ideas about race and color powerfully shaped the pursuit of freedom.

Growing Up with the Country: Family, Race, and Nation After the Civil War

Kendra Taira Field is Associate Professor of  History and Director of the Center for the Study of Race and Democracy  at Tufts University. Field is the author of Growing Up with the Country: Family, Race, and Nation after the Civil War (Yale University Press, January 2018).

The book traces her ancestors’ migratory lives between the Civil War and the Great Migration. Field also served as Assistant Editor to David Levering Lewis' W.E.B. Du Bois: A Biography (Henry Holt, 2009). Her current book project is about the African American genealogical quest from the Middle Passage through the present. In  this vein, Field is co-convening a 2019-2020 Mellon Sawyer Seminar on  the politics of kinship, “Defamiliarizing the Family: Genealogy and  Kinship as Critical Method."

Field has been awarded fellowships from the Ford Foundation, the Andrew W. Mellon Foundation, the Huntington Library, and Harvard University's Charles Warren Center in American History. Field's recent articles have appeared in the Journal of American History, the Western Historical Quarterly, and Transition. She is the recipient of the Western Writers of America's, 2017 Spur Award for Best Western Short Nonfiction, the 2016 Boahen-Wilks Prize, and the OAH's Huggins-Quarles Award. Field has advised and appeared in historical documentaries including Henry Louis Gates, Jr.'s “The African Americans: Many Rivers to Cross" (2013) and "Roots: A History Revealed" (2016).

Field received her Ph.D. in American History from New York University. She also holds a Master's in Public Policy from Harvard University's Kennedy School of Government and a B.A. from Williams College. Previously, Field served as Assistant Professor of History at the University of California, Riverside, and worked in education and the non-profit sector in Boston and New York.