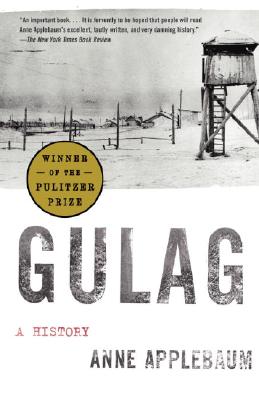 In this magisterial and acclaimed history, Anne Applebaum offers the first fully documented portrait of the Gulag, from its origins in the Russian Revolution, through its expansion under Stalin, to its collapse in the era of glasnost.

The Gulag--a vast array of Soviet concentration camps that held millions of political and criminal prisoners--was a system of repression and punishment that terrorized the entire society, embodying the worst tendencies of Soviet communism. Applebaum intimately re-creates what life was like in the camps and links them to the larger history of the Soviet Union. Immediately recognized as a landmark and long-overdue work of scholarship, Gulag is an essential book for anyone who wishes to understand the history of the twentieth century.

Anne Applebaum is a staff writer for The Atlantic and a Pulitzer-prize winning historian. She is also a Senior Fellow at the Johns Hopkins School of Advanced International Studies and the Agora Institute, where she co-directs Arena, a program on disinformation and 21st century propaganda.

A Washington Post columnist for fifteen years and a former member of the editorial board, she has also worked as the Foreign and Deputy Editor of the Spectator magazine in London, as the Political Editor of the Evening Standard, and as a columnist at Slate as well as the Daily and Sunday Telegraphs. From 1988-1991 she covered the collapse of communism as the Warsaw correspondent of the Economist magazine and the Independent newspaper.

She has lectured at Yale, Harvard, Stanford and Columbia Universities, as well as Oxford, Cambridge, London, Heidelberg, Maastricht, Zurich, Humboldt, Texas A&M, Houston and many others. In 2012-13 she held the Phillipe Roman Chair of History and International Relations at the London School of Economics. She received honorary doctorates from the Georgetown School of Foreign Service and Kyiv-Mohyla University.

Anne Applebaum was born in Washington, DC in 1964. After graduating from Yale University, she was a Marshall Scholar at the LSE and St. Antony’s College, Oxford. Her husband, Radoslaw Sikorski, is a Polish politician and writer. They have two children, Alexander and Tadeusz.