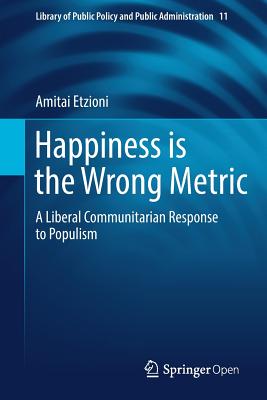 Happiness Is the Wrong Metric: A Liberal Communitarian Response to Populism

This book is open access under a CC BY 4.0 license.

This timely book addresses the conflict between globalism and nationalism. It provides a liberal communitarian response to the rise of populism occurring in many democracies. The book highlights the role of communities next to that of the state and the market. It spells out the policy implications of liberal communitarianism for privacy, freedom of the press, and much else. In a persuasive argument that speaks to politics today from Europe to the United States to Australia, the author offers a compelling vision of hope. Above all, the book offers a framework for dealing with moral challenges people face as they seek happiness but also to live up to their responsibilities to others and the common good.

At a time when even our most basic values are up for question in policy debates riddled with populist manipulation, Amitai Etzioni's bold book creates a new frame which introduces morals and values back into applied policy questions. These questions span the challenges of jobless growth to the unanswered questions posed by the role of artificial intelligence in a wide range of daily life tasks and decisions. While not all readers will agree with the communitarian solutions that he proposes, many will welcome an approach that is, at its core, inclusive and accepting of the increasingly global nature of all societies at the same time. It is a must read for all readers concerned about the future of Western liberal democracy.

In characteristically lively, engaging, and provocative style Etzioni tackles many of the great public policy dilemmas that afflict us today. Arguing that we are trapped into a spiral of slavish consumerism, he proposes a form of liberal communitarian that, he suggests, will allow human beings to flourish in changing circumstances.

Happiness Is the Wrong Metric: A Liberal Communitarian Response to Populism