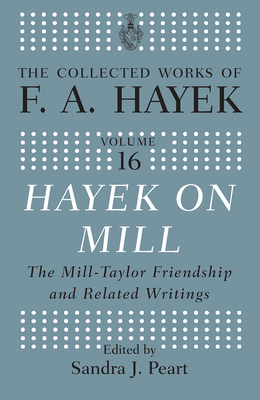 Hayek on Mill: The Mill-Taylor Friendship and Related Writings

Best known for reviving the tradition of classical liberalism, F. A. Hayek was also a prominent scholar of the philosopher John Stuart Mill. One of his greatest undertakings was a collection of Mill's extensive correspondence with his longstanding friend and later companion and wife, Harriet Taylor-Mill. Hayek first published the Mill-Taylor correspondence in 1951, and his edition soon became required reading for any study of the nineteenth-century foundations of liberalism.

This latest addition to the Collected Works of F. A. Hayek series showcases the fascinating intersections between two of the most prominent thinkers from two successive centuries. Hayek situates Mill within the complex social and intellectual milieu of nineteenth-century Europe--as well as within twentieth-century debates on socialism and planning--and uncovers the influence of Taylor-Mill on Mill's political economy. The volume features the Mill-Taylor correspondence and brings together for the first time Hayek's related writings, which were widely credited with beginning a new era of Mill scholarship.

Hayek on Mill: The Mill-Taylor Friendship and Related Writings

Dr. Sandra J. Peart became the fourth dean of the Jepson School of Leadership Studies in August 2007. In August 2018, she was appointed to the E. Claiborne Robins Distinguished Professorship in Leadership Studies. She became president of the Jepson Scholars Foundation in 2019. She is immediate past president of the International Adam Smith Society and a past president of the History of Economics Society, where she began the Young Scholars Program. Since 2018, she has been a Reform Club member and a Royal Society for the Encouragement of Arts, Manufactures and Commerce Fellow.

Peart has written or edited 11 books, including her most recent book "The Essential John Stuart Mill" (Frasier Institute: 2021) and two books she co-authored with David M. Levy: "Towards an Economics of Natural Equals: A Documentary History of the Early Virginia School" (Cambridge University Press, 2020) and "Escape from Democracy: The Role of Experts and the Public in Economic Policy" (Cambridge University Press, 2017). She is the author of more than 100 articles in the areas of constitutional political economy, leadership in experimental settings, ethics and economics, and the transition to modern economic thought. Her popular articles on leadership, ethics, higher education, and economic themes have appeared in The New York Times, The Chronicle of Higher Education, USA Today, and the Washington Post.

Peart obtained her doctorate in economics from the University of Toronto in 1989. She began her career as an assistant professor of economics at the College of William and Mary and then joined the faculty at Baldwin-Wallace University. She was a visiting scholar at the Center for Study of Public Choice at George Mason University in 2004–05, and the following year, she was a fellow of the American Council on Education.