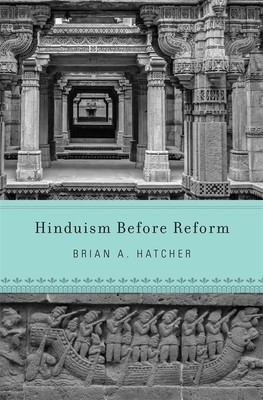 A bold retelling of the origins of contemporary Hinduism, and an argument against the long-established notion of religious reform.

By the early eighteenth century, the Mughal Empire was in decline, and the East India Company was making inroads into the subcontinent. A century later Christian missionaries, Hindu teachers, Muslim saints, and Sikh rebels formed the colorful religious fabric of colonial India. Focusing on two early nineteenth-century Hindu communities, the Brahmo Samaj and the Swaminarayan Sampraday, and their charismatic figureheads--the cosmopolitan Rammohun Roy and the parochial Swami Narayan--Brian Hatcher explores how urban and rural people thought about faith, ritual, and gods. Along the way he sketches a radical new view of the origins of contemporary Hinduism and overturns the idea of religious reform.

Hinduism Before Reform challenges the rigid structure of revelation-schism--reform-sect prevalent in much history of religion. Reform, in particular, plays an important role in how we think about influential Hindu movements and religious history at large. Through the lens of reform, one doctrine is inevitably backward-looking while another represents modernity. From this comparison flows a host of simplistic conclusions. Instead of presuming a clear dichotomy between backward and modern, Hatcher is interested in how religious authority is acquired and projected.

Hinduism Before Reform asks how religious history would look if we eschewed the obfuscating binary of progress and tradition. There is another way to conceptualize the origins and significance of these two Hindu movements, one that does not trap them within the teleology of a predetermined modernity.

Brian Hatcher's research focuses on the transformation of Hinduism in colonial and contemporary South Asia, with a special interest in early colonial Bengal. His publications explore issues of religious reform, vernacular modernity, the work and significance of translation, and the colonial life of Sanskrit. An expert on the life and work of Ishvarchandra Vidyasagar, he is also known for his interpretations of "bourgeois Hinduism" and modern Hindu eclecticism.

His most recent book, Hinduism Before Reform (Harvard University Press, 2020), offers the first ever in-depth comparison of the early histories of the Swaminanarayan Sampraday and the Brahmo Samaj. When treated as modern Hindu reform movements, the Swaminanarayan Sampraday and the Brahmo Samaj tend to be trapped within normative frameworks structuring judgments about progress, Hindu modernity, and the place and role of religion in the Indian nation-state.

Hinduism Before Reform asks what we might discover if we were to compare the Swaminanarayan Sampraday and the Brahmo Samaj not as reform movements but as religious polities projected by two innovative religious lords active in the first quarter of the nineteenth century. What might we learn about the articulation of Hinduism during the early colonial period, and how might that enable us to rethink the eventual encompassment of the Swaminanarayan Sampraday and the Brahmo Samaj within an emergent "empire of reform" during the later nineteenth century?

For his next book-length project, Brian Hatcher is seeking to map the spread and chronicle the history of the Dasnami Sampraday in southwestern Bengal between the eighteenth century and the present. Combining field research with textual study, this project aims to chart the rise and fall of an influential set of religious actors who placed their stamp on the landscape and religious life of lower Bengal. Research for this project has been supported by fellowships from the American Institute of Indian Studies and the American Philosophical Society.

During the spring of 2019, Brian Hatcher was the J.P. and Beena Khaitan Visiting Fellow at the Oxford Centre for Hindu Studies.

Watch a video of Brian Hatcher's lecture Vidyasagar: Articulate Subject of the Non-Renaissance", delivered at Victoria Memorial Hall in Kolkata, India on September 28, 2019.