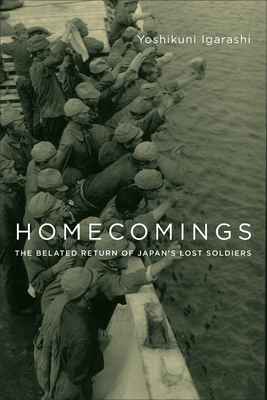 Soon after the end of World War II, a majority of the nearly 7 million Japanese civilians and servicemen who had been posted overseas returned home. Heeding the call to rebuild, these veterans helped remake Japan and enjoyed popularized accounts of their service. For those who took longer to be repatriated, such as the POWs detained in labor camps in Siberia and the fighters who spent years hiding in the jungles of islands in the South Pacific, returning home was more difficult. Their nation had moved on without them and resented the reminder of a humiliating, traumatizing defeat.

Homecomings tells the story of these late-returning Japanese soldiers and their struggle to adapt to a newly peaceful and prosperous society. Some were more successful than others, but they all charted a common cultural terrain, one profoundly shaped by media representations of the earlier returnees. Japan had come to redefine its nationhood through these popular images. Yoshikuni Igarashi explores what Japanese society accepted and rejected, complicating the definition of a postwar consensus and prolonging the experience of war for both Japanese soldiers and the nation. He throws the postwar narrative of Japan's recovery into question, exposing the deeper, subtler damage done to a country that only belatedly faced the implications of its loss.

By examining the tension between the repression and the expression of the trauma of the war, it contemplates the impact of the war and defeat on postwar Japanese society. Igarashi’s second book, Homecomings: The Belated Return of Japan’s Lost Soldiers (Columbia UP, 2016) discusses the former soldiers who belatedly returned to postwar Japan after the end of the Asia Pacific War.

It pays particular attention to Japanese POWs detained in Siberian labor camps and soldiers who survived in the jungles of the South Pacific for more than a quarter century. Igarashi’s third book, Japan circa 1972: Masculinity in the Age of Mass Consumption and Metavisuality (Columbia University Press, forthcoming) focuses the radical economic, social, and cultural transformation of Japanese society in the late 1960s and early 1970s, stemming from the development of mass consumer society, and analyzes Japanese society’s anxiety-ridden and often violent responses to that transformation.