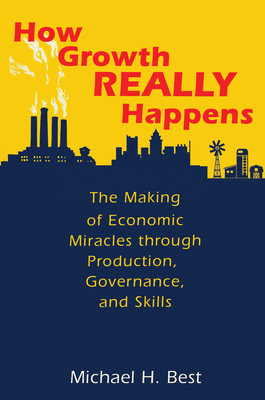 How Growth Really Happens: The Making of Economic Miracles Through Production, Governance, and Skills

A groundbreaking study that shows how countries can create innovative, production-based economies for the twenty-first century

Achieving economic growth is one of today's key challenges. In this groundbreaking book, Michael Best argues that to understand how successful growth happens we need an economic framework that focuses on production, governance, and skills.

This production-centric framework is the culmination of three simultaneous journeys. The first has been Best's visits to hundreds of factories worldwide, starting early as the son of a labor organizer and continuing through his work as an academic and industrial consultant. The second is a survey of two hundred years of economic thought from Babbage to Krugman, with stops along the way for Marx, Marshall, Young, Penrose, Richardson, Schumpeter, Kuznets, Abramovitz, Keynes, and Jacobs. The third is a tour of historical episodes of successful and failed transformations, focusing sharply on three core elements--the production system, business organization, and skill formation--and their interconnections.

Best makes the case that government should create the institutional infrastructures needed to support these elements and their interconnections rather than subsidize individual enterprises. The power of Best's alternative framework is illustrated by case studies of transformative experiences previously regarded as economic miracles: America's World War II industrial buildup, Germany's postwar recovery, Greater Boston's innovation system, Ireland's tech-sector boom, and the rise of the Asian Tigers and China.

Accessible and engaging, How Growth Really Happens is required reading for anyone who wants to advance today's crucial debates about industrial policy, free trade, outsourcing, and the future of work.

How Growth Really Happens: The Making of Economic Miracles Through Production, Governance, and Skills

Michael H. Best is professor emeritus, University of Massachusetts Lowell where he was Co-Director of the Center for Industrial Competitiveness. He has examined transformation of production systems in history, economic theory, and by visiting many, many hundreds of enterprises usually in support of industrial restructuring programs in nearly twenty countries. His ‘capability and innovation’ perspective is developed and illustrated with enterprise, regional and national case studies in three books, How
Growth Really Happens: The Making of Economic Miracles through Production, Governance, and Skills, Princeton University Press, 2018 (winner of the 2018 Schumpeter Prize); The New Competitive Advantage: The Renewal of American Industry, Oxford University Press, 2001 and The New Competition: Institutions of Industrial Restructuring, Harvard University Press and Polity Press, 1990. He lives in Oxford.

The Capabilities and Innovation perspective was simultaneously shaped by and applied in enterprise modernization, technology management, and sector development projects he has led in various industrial settings including London, Slovenia, India, Cyprus, Jamaica, Honduras, Ireland and Malaysia as well as in Massachusetts.

Professor Best was a founding editorial board member of Massachusetts Benchmarks: The Quarterly Review of Economic News and Insight, jointly published by the University of Massachusetts and the Federal Reserve Bank of Boston; and was Center Evaluator and member of the Industrial Advisory Board for the Biodegradable Polymer Research Center, an Industry-University Cooperative
Research Center sponsored by the National Science Foundation to carry out research on biodegradable polymers. Member companies include 3M, Monsanto, Eastman Chemical, Dow, BASF, BF Goodrich, and Cargill plus the Environmental Protection Agency of the US Government. He was on the board of the Massachusetts Product Development Corporation, a quasi-public, royalty-based financial institution from 1986 to 1992 and conducted sector strategy analyses at the Greater London Enterprise
Board, a public sector venture capital agency from 1983 to 1985.

The research methodology that informs Professor Best’s approach demands going inside the firms in any region or nation to characterize both the relative position and performance of enterprises within the global business and production system, but also to capture the distinctive regional and national ‘signatures’ of enterprises.  This involves an analysis of the ‘industrial eco-system’ in which firms operate including the deep craft skills, the specific engineering expertise, the science and technology infrastructure, business development finance, and other extra-firm characteristics that impact on business performance.  Yet a third layer of investigation is required.